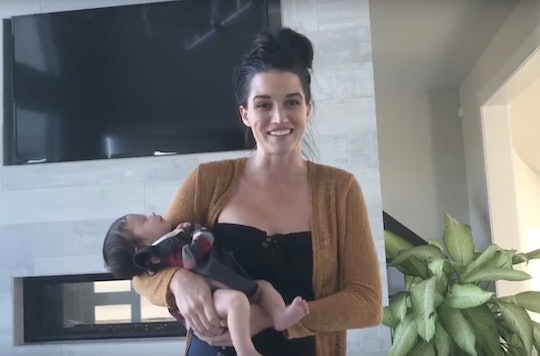 When Bachelor in Paradise couple Jade Roper and Tanner Tolbert first welcomed their baby back in August, they hadn't yet revealed the struggle that it took to bring her into the world. The "surprise birth" of Bachelor in Paradise's Jade Roper's daughter actually caught the couple completely off guard. Roper and Tolbert detailed baby Emerson Avery Tolbert's arrival on their blog, complete with a 23-minute video of the parents rehashing how it all went down a bit earlier than expected.

About four weeks before her due date, as she explained in the video, Roper's water broke, throwing her birth plan all out of whack. "I was using a mid-wife and I wasn't allowed to deliver at the birth center at 36 weeks," Roper said in the video, seeing as the facility only allowed deliveries starting at 37 weeks.

Adamantly against a hospital delivery, Roper remembered thinking: "‘I don’t want it to happen yet. I’m not ready.'" She added, "People always talk about having bags packed before the birth... We had nothing because it was a month out and we figured we had time to not only physically prepare, but mentally prepare.”

But the situation was undeniable, and Roper explained that she and Tolbert needed to get some help. Luckily, Roper was able to endure her labor in a bathtub, like she'd hoped for from the start. From there, Roper was able to embrace the pain of childbirth. "I will never forget the feeling of the baby’s head come into the birth canal," she shared in the vlog. She admitted it was undoubtedly painful, dubbing it "the most intense pressure," but also "the coolest feeling."

Though things didn't play out as Roper hoped they would, she and Tolbert were given a healthy baby girl in the end. In fact, it was her early delivery that actually guaranteed Emerson's health. Upon her birth, doctors found a knot in Emerson's umbilical cord, according to People, an issue that had the potential to cause so much harm as it "could've cut off all nutrients to Emerson and she would’ve died," Roper explained in the video.

Since then, it's entirely clear that Roper and Tolbert both can't get enough of baby Emmy — as they like to call her — and love posting photos of their little family unit on Instagram. Her bio explains that Roper's dedicated to "documenting first time mom life," and her photos are brimming with love. To celebrate one month of Emmy, Roper shared all of the baby's favorite activities:

She loves cuddling, eating her hands, getting baths from daddy, waving her hands in the air like she just don't care, screeching high pitched shrills to grab your immediate attention, and listening to momma sing to her.

On top of all of that sweetness, Roper noted on Instagram that her "favorite thing" is that Emmy has "this way of gazing at you with a deep, gentle intensity it makes your whole life feel complete."

Roper and Tobert's romance is the stuff of reality TV dreams. They were together for only a few weeks prior to their engagement, and married about four months later, according to People. Seeing that their love story was a bit rushed, the two sought a little bit of help in making sure that they had the best relationship possible. For a second stint on television, they joined the cast of Marriage Boot Camp: Reality Stars because they "never got to do premarital counseling, because everything moved so quick with us,” Tolbert shared, according to People. “We kind of viewed it as an opportunity to lay a good foundation.”

Roper described Emmy's birth experience to be altogether "beautiful, exhilarating, spiritual, painful, sometimes scary, [and] imperfectly perfect." Though the birth operated on its own timeline, Roper and Tolbert's baby is healthy, happy, and very obviously so loved by her two parents.

More Like This
Dwyane Wade & Kaavia James Took "Twinning" To A Whole New Level In These Sweet Photos
10 Of Céline Dion's Best Quotes on Motherhood
Meghan & Harry Celebrated Their Anniversary As A Family Of Four For The First Time
Rihanna & A$AP Rocky’s Baby Is Here!