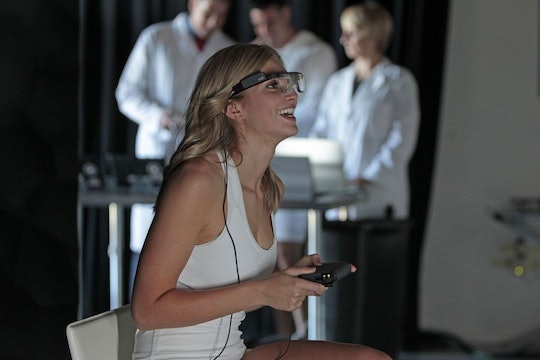 'Bachelor' Makes Olivia Seem Crazy, But She Might Just Be The Sanest Person On The Show

Monday's episode of The Bachelor confirmed that 23-year-old news anchor Olivia will continue to be this season's token 'crazy' girl, but really, Olivia is not the craziest Bachelor contestant. It could even be argued that she's the sanest. Stick with me on this one.

Yes, it's true that during Monday's episode, Olivia made it clear — in a super territorial fashion — that she and Ben are destined to be man and wife. Actually, it's possible she thinks they're already married. "I think he’s my husband, and now I feel like I’m being cheated on,” Olivia said of Ben's dates with the other contestants. Her confidence in their destined union is absolute. “I feel so good about what we have," she said during the episode. "So good."

Viewed in one light, these comments might imply a certain break with reality. Viewed in another light, though, it's possible that Olivia is the only contestant who truly understands what she's taking part in: an all-out, tooth and nail fight for an incredibly handsome, incredibly accomplished bachelor. Winning this type of competition requires a proactive attitude, so it's actually very sane that Olivia interrupted not one, but two private conversations Ben was having with other contestants during Monday's episode.

“He is experiencing relationships with other people, which I know is going to happen," Olivia told the camera at one point on Monday. "But I’m not threatened by anyone that goes on a one-on-one with Ben. He is... mine.”

Later in the episode, Olivia told Ben that she was "falling for [him]", which he generously responded to with silence. But when Olivia returns to the group, she told another contestant that she had told Ben she was falling in love with him, and that he reciprocated. It's a lie, yes, but it's a sane lie, because what better way to eviscerate your competition than make them doubt themselves?

Another sign of Olivia's sanity is the far-out striptease show that she performed in Vegas. She got a lot of flak for that one, but she was actually being pretty creative there. "I don’t have talent...so I tried to do something way outside my comfort zone," Olivia told the camera. Which makes a lot of sense. She also kept it real by being, you know, human when she admitted that she was really embarrassed by the display. After the performance, she broke down crying and said she was having a panic attack, which is actually a fully legitimate reaction to the stressful dating Battle Royale that is The Bachelor.

Olivia is a sane girl in an insane Bachelor world, and she deserves our understanding, if not our sympathy. Plus, she's keeping the ratings up, and we all need season 21 to happen, right? But don't listen to me; this Twitter user knows what's up: