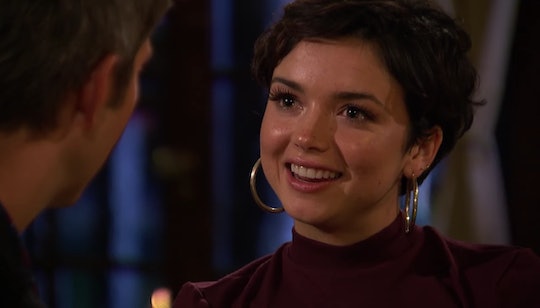 'Bachelor' Star Bekah Martinez Is Pregnant & Happier Than Ever

Bekah Martinez might not have found true love with Arie on The Bachelor, but in an exclusive interview with PureWow published Wednesday, the 23-year-old revealed some super exciting news. Though Bachelor Nation was pretty bummed to hear that the fan favorite wouldn't be appearing on Bachelor in Paradise, it seems to have more than worked out for the best: Bachelor star Bekah Martinez is pregnant, and said it's "legitimately a dream come true."

In a YouTube video accompanying her interview, Martinez revealed that what fans didn't know when they learned she wouldn't actually be returning to reality TV, was that her decision to turn down BIP wasn't simply about not being interested. In the clip, Martinez explained, "I had already said no, but it was still kind of crazy that I had this secret of like, 'not only do I have a boyfriend, I also now have a kid on the way'."

Part of the reason why Martinez kept the news under wraps? She was still coming to terms with it herself. The 23-year-old told PureWow that when she learned she was pregnant, she'd only been dating her boyfriend, Grayston Leonard, for three months, and that the news came as a big shock to both of them. She said,

I was in disbelief and thought, 'Is this really happening?' I immediately called Grayston and then went across the street to the Dollar Tree and bought two more pregnancy tests. They, of course, were both positive.

Anyone who has experienced an unexpected pregnancy knows that it can bring about *a lot* of complicated feelings, and dealing with those feelings while also navigating a brand-new relationship can be extremely difficult. In time, Martinez said she and Leonard came to the conclusion that they were totally on the same page about being ready for parenthood, but she told PureWow that it felt important to her to be able to go on to share her story publicly so that other women who have found themselves in a similar situation can "know they’re not alone."

For now, that means opening up about her pregnancy, and sharing what it was really like for her and Leonard to wrap their heads around the news that they had a little one on the way. But Martinez — who is currently around 20 weeks pregnant — said that, going forward, she intends on sharing a lot more about her pregnancy and relationship on social media as it progresses.

In July, the former nanny first spilled the beans about her whirlwind relationship with Leonard in a separate interview with PureWow, and at the time, she told the outlet that her budding relationship was the reason behind her decision to skip out on Bachelor in Paradise. Although she said she'd originally intended to go on the show, she realized she'd ultimately rather give the relationship a shot:

...[As] it got closer to [filming] I just started realizing that it wasn’t worth it for me to put myself in that environment where I could possibly jeopardize what I had with Grayston. I just decided that the guy that I was with back home was the person that I wanted to be with right now, and I didn’t want to risk leaving that by keeping my options open and going on Paradise to see if there were any guys there for me. It was kinda this realization that if I have something right in front of me that’s good, why am I going to go out of my way to look for something else?

Following her instinct definitely seemed to be the right call: at the time, Martinez told PureWow that Leonard was "just so unique and so special and so cool," and that she loved that he "has a curiosity about the world and zest for life." Now that Leonard is set to be a first-time dad though, Martinez said he's taking his new role very seriously. She explained,

He immediately started researching prenatal vitamins and then presented me with the top four options to choose from. He’s been really into finding resources and reading books about pregnancy. He stepped up to the plate and it just makes me feel that much better about starting this new chapter in my life with him.

As wonderful as it always is when Bachelor nation couples go the distance, it's also super heartwarming when those who didn't manage to find love on the show find a happy ending on their own terms. And while a surprise pregnancy early on in her relationship may not have exactly been what Martinez had been expecting, it sounds like it's working out beautifully.

More Like This
Chrissy Teigen & John Legend Are Back On The Red Carpet
Kim Kardashian Stars In Hilarious House Of The Dragon Parody, The Targashians
Lifelong Teacher Dr. Jill Biden Loves Watching Abbott Elementary Too
10 Parenting Lessons From Abbott Elementary That You'll Want To Write Down