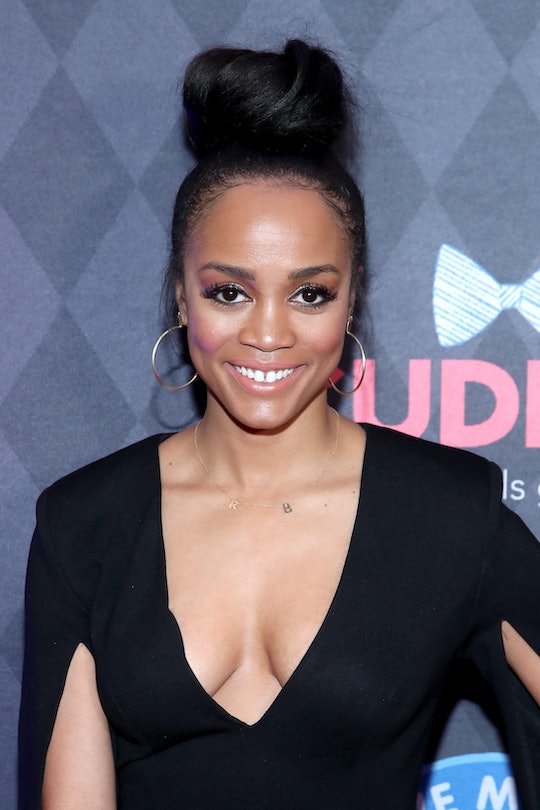 'Bachelorette' Rachel Lindsay Made An Important Point About The Show's Reunion

She was an ambitious attorney who risked it all to find love on TV. With her dream wedding finally coming up more than two years after she was first introduced to audiences, this reality star stood out for her maturity and clarity about what she wanted in a romantic relationship. But mingling among other past stars of her hit show, she realized she stood out physically — and not in a good way. Bachelorette Rachel Lindsay said the show's reunion didn't work for this important reason, and it should be acknowledged.

As Us Weekly reported, 12 past stars of The Bachelorette, including inaugural candidate Trista Sutter, Season 5’s Jillian Harris, and Becca Kufrin from Season 14 met up with perennial host Chris Harrison for an ABC reunion, which was the first time many of the women were all together.

Although photos from the event showed smiling faces, things were a bit different for Lindsay, who first caught the public's eye when she appeared on Nick Viall's season of The Bachelor, and was soon asked to helm her own season of the sister franchise, in which one woman does the picking from an assortment of men.

This is a huge point, and one I think shouldn't just be glossed over. Lindsay, 34, became the first black woman to helm the show in Season 13, in 2017. And sure, it felt like progress to me, especially because Lindsay was a popular cast member and even in the midst of a husband hunt never lost her dignity (which, if you know this show, is an impressive feat; cameramen are looking for people to fall apart).

But the fact is, there's been, like, a couple candidates of color on this show. Not a ton. So the fact that Lindsay basically has no company in her shoes says... what... about America? That we think women of color aren't interested in dating? Of course not. So once again, the question arises of, when will our media look like the world around us?

And of course, the executives behind the show got some flack at the time for how they announced Lindsay's casting, as the Daily Beast reported, which was a little overblown:

Lindsay made previous comments regarding the hit show and race, including discussing the fact with Us Weekly last year that her season of the franchise had particularly low ratings.

Strong words, but don't expect Lindsay to sit around feeling sorry for herself. She's way too awesome for that, and anyway, as E! News reported, she's totally in the middle of planning her wedding to Bryan Abasolo, the absolutely gorgeous guy who got her final rose at the end of her "journey" (because they always use that word).

"I have to confess that I was very much so an eager beaver when everything started because that's what I wanted. I wanted to marry Bryan at the end of 2018. That was all very real, but that's also when I thought that we were going to get an ABC wedding and that's not looking like it's happening now so now I actually have to plan a wedding or hire somebody to help me do that," Lindsay said.

But now their wedding date is coming up. The outlet added that Lindsay and Abasolo will tie the knot in August 2019.

The star added to Entertainment Tonight that the wedding will be bigger than she originally thought, closer to 150 people instead of the 50 she initially planned, and will take place this summer in a warm location.

In any case, I'm so glad Lindsay was honest with her feelings. The more conversation we have around making sure all groups feel represented in the culture as a whole, the better. Refinery29 noted that the franchise still has a long way to go in its push for diversity.

For her part, though, Lindsay will always focus on the positive. It wasn't beyond her at the Bachelor reunion that society has nevertheless made progress as a whole.

"The best part for me was being in the midst of the women who paved the way for me to be the Bachelorette," the star noted to Us Weekly.

"They started this 'journey' at a time when it wasn’t popular to be the Bachelorette. America was not as accepting to see a woman in this role the way they were accepting of men."

Good point, Rach. And best of luck to you!