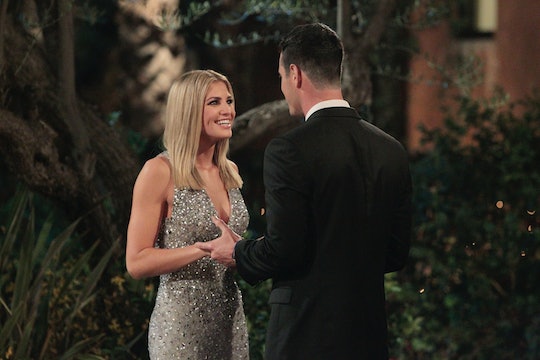 Every season, right from the first episode, Bachelor fans start assessing the contestants. Usually, the fans split the women into categories: there’s the mean one, the so-called "crazy" one, the sweetheart, the underdog, and the one whose name no one can remember no matter how many times she makes it through a rose ceremony. Thanks to social media, the commentary is immediate — and honestly, it can be pretty brutal. While the first episode resulted in an onslaught of memes and tweets about Lace’s drunken antics, the focus of the second episode was almost certainly current Bachelor frontrunner Olivia’s mouth. The internet skewered Olivia, saying she has a big mouth, but making fun of her appearance really isn't acceptable.

The 25-year-old news anchor seems like a total shoe-in so far for the coveted final rose, and she’s not afraid to admit it. But just as much as The Bachelor is about finding love, it’s also about drama. And after Olivia proudly showed off her intensely competitive streak during the second episode, the internet found a way to make fun of her thanks to her now-signature open mouth gape.

OK, so there’s no denying that Olivia’s reaction to almost everything during the last episode was obvious, and also kind of hilarious. It was just so over the top! Is the announcement of the first one-one-one date really that exciting? And yes, as far as mouths go, Olivia’s is probably bigger than average. But would we derive so much joy out of laughing about it if she weren’t, absolutely gorgeous and totally killing it with Ben? (Girl got both the first impression rose and the first group date rose, you guys.)

During the first episode, Olivia did seem to make a great first impression, and it didn’t seem that surprising when Ben picked her. But during the second episode, fans saw Olivia become much more open about her confidence in the “relationship” she had with Ben (her words, not mine), and she didn’t feel bad about letting the other girls know about it. She knew that she was the girl to beat, and she made absolutely no apologies for that.

But Olivia either doesn’t care about being liked by viewers, or she missed the memo that Bachelor fans like their contestants humble. As E! News noted, there always seems to be a public uproar when a Bachelor “villain” does well (Vienna Girardi? Courtney Robinson? I REST MY CASE). And since Olivia’s exaggerated open-mouth facial expressions were such an easy target during the second episode, it’s no surprise that viewers had a field day.

Even former Bachelor Chris Soules got in on the Olivia-hate:

It’s easy to make fun of Olivia, sure. But would her mouth have been such a hot topic if she hadn’t been so confident and ruthless about her desire to win Ben’s heart? Besides, it’s not like she’s in control of the shape or size of her mouth. It doesn’t ever seem right to make fun of the women who participate in The Bachelor regardless of how they end up looking on TV (these things are heavily edited, don’t forget). But if viewers really don’t like Olivia for her boldness or competitiveness (or, maybe, just because she’s doing so well), then judging her on her actions instead of her unconscious facial expressions seems like the better way to go.

More Like This
Meghan Markle Calls On Men "To Be Vocal" In The Aftermath Of Roe v. Wade Ending
Why Babies Love Water, According To Experts
Everything You Need To Know About Colostrum Harvesting
Why It's Crucial to Get Good Sleep As A New Mom — Plus, Tips On How To Do It