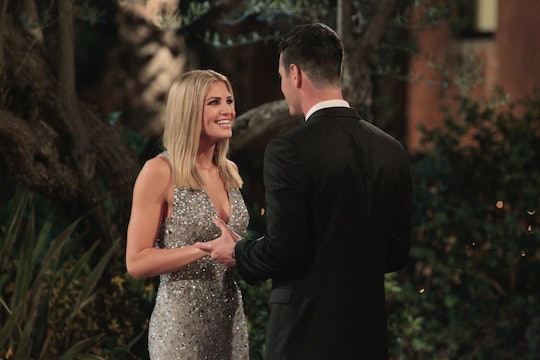 Fans of The Bachelor already have strong feelings about contestant Olivia Caridi, but the few aired episodes reveal little about who she really is when the cameras are off. Olivia's Instagram and Twitter suggest that she's got passion, heart, and a sense of humor. According to PEOPLE, Olivia is the "one to watch" on The Bachelor, but it definitely looks as though she's got a full life off-screen, too.

In the realm of Bachelor fandom, Olivia is already divisive. She landed the coveted First Impression Rose and nailed a 7.42 on a 10-point scale during a scientific compatibility test with Ben (the highest score of all contestants). Her early success and confidence prompted animosity from some of the other women. But so far, Olivia appears to be mostly unfazed as she pursues the ultimate love story. If you want to get to know this anchor-turned-reality-star a bit better, here are five things you'll learn from her Instagram and Twitter accounts:

She Loves Her Job

Olivia appeared on TV long before she received her first rose. According to her website, Olivia was a working journalist before being cast on The Bachelor. She studied journalism at Texas Christian University and got her first job post-college in Bristol, Virginia as a General Assignment Reporter. After showing her skills, she got the chance to work as both a reporter and an anchor. And while she's had to step away from the news desk for her reality show appearance, she still posts often about the jobs she loves:

She captioned this picture, "'It is a beautiful thing when a career and a passion come together.' Missin that #liveshot life. #tvnews#dreamjob".

She Has A Great Sense Of Humor

When asked about her most embarrassing moment for her biography, Olivia said that nothing embarrasses her. That's a good thing: though Olivia is off to a strong start with Ben, the other contestants aren't feeling the love. While she was off bonding with The Bachelor, some of the ladies started mocking Olivia's toes. Her response? She posted a picture of a pair of hobbit feet, complete with the caption, "People are asking what my toes look like, so I thought I'd just take a quick pic for y'all." That's the spirit!

Olivia is also known for making a wacky face on the show, mentioned often on social media using #OliviasMouth. She seems to be a believer that imitation is the sincerest form of flattery too, even posting pictures of Bachelor fans doing their best impressions of the Austin, Texas native.

She Loves Her Friends & Family

Though The New York Post named Olivia "'Bachelor' enemy No. 1" (rude), she seems to have a supportive network surrounding her in real life, sharing photos of her loved ones on a regular basis. Aww.

One holiday image is captioned, "Merry Christmas from the Caridi family! The most wonderful time of the year." If you don't think that's, the sweeted thing....

She Celebrates The Women In Her Life

Olivia is all about the girl power. Posting a photo of herself with her best friend last month, she wrote,

When you're lucky enough to find a weirdo, never let them go. Thanks Rach for always laughing at me even when I don't think I'm funny.

And who said "friends" had to be those outside your family? In early January, the Bachelor contestant posted a photo of herself with her sister, captioning it sweetly, "Could only make it a week apart before visiting my best friend." My heart!

She Stands Up Against Bullying

Olivia hasn't always felt so secure in her relationships. On her blog last week, Olivia wrote about growing up introverted and overweight, explaining at length,

Ever since I was a young girl, I’ve always struggled with the feeling of “fitting in.” I’m an introvert, uncomfortable in large groups of people, awkward at times and very serious. I was overweight, and my closest friend in second grade said to me, “We can’t be friends anymore because you’re fat.” I was bullied. I ate alone in the cafeteria, sat by myself on the school bus. Kids were mean, and I was never a part of a group. Every day after school, I went home and cried. I felt hopeless, wondering if I’d ever find my role in the world.

Dealing with bullying on The Bachelor may be an uncomfortable blast from the past, but Olivia is trying to stay above it all. Her Instagram bio includes #EndBullying, and she's not shy about addressing the subject on Twitter:

She Wants To Help People

In addition to bullying prevention, Olivia is committed to supporting causes and individuals she believes in. In a blog post from early January titled, "A Passion for People", the contestant elaborated,

Since the first time I fell in love with broadcast journalism, my life has changed dramatically. It has been enriched by meeting the people behind the news stories – the moms, dads, grandparents, veterans, emergency responders and children who have placed their trust in me to tell their stories with fairness and compassion.

My job is a blessing because I get to meet extraordinary people and spread the word about topics like child hunger. These angels from Wise Primary in Virginia go to school hungry, but because of some generous parents and the Lunchbox Project, they get a free snack at school. Right now I'm selling my clothes on an app called @poshmark and all the money I make will go directly to the efforts to feed these kids. So if you have a second, download the app and check out some of the items in my closet! #giveback

She Loves 'The Bachelor'

This one probably isn't a surprise, but Olivia is seriously delighted to share about her time on the show. On her blog, she denied rumors that she had invested in a $40,000 wardrobe for The Bachelor and that she had broken up with a "serious boyfriend" in order to pursue Ben, but she did write that she was happy to have been a contestant:

I love the show and I am a hopeful romantic. Meeting Ben Higgins was a “limited time offer” and I wanted to try to have it all. The opportunity to meet Ben was now or never. I went on this season because I genuinely hoped to have a connection with Ben.

Despite having a good time on the ABC reality show, Olivia humorously admitted on Twitter earlier this month that it wasn't all a fairytale, making jokes about her own awkward moments and pointing out the things that went wrong. "Fun fact: I hit my head REALLY HARD on the door getting out of the limo," she joked. "Pretty sure I'm still concussed."

Olivia may not be everyone's favorite contestant, but the breakout competitor on The Bachelor seems to be secure in her career, her community, and her commitment to good causes. Whether she receives the final rose or not, it's clear that she's invested in reality beyond television.