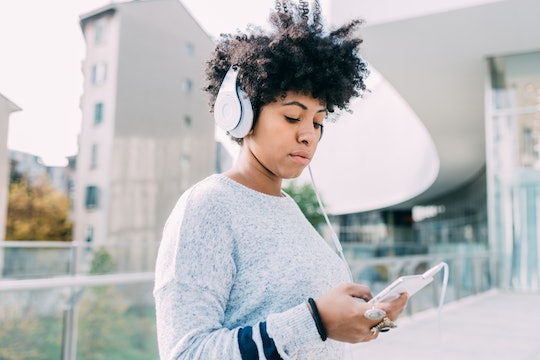 From Twitter to Facebook to Instagram and more, social media has become incredibly popular, with what seems like the majority of young adults maintaining at least one account on any number of platforms. Most social media apps state part of their purpose is to help people connect, but is that what actually happens? According to a new study, bad experiences on social media may make people feel more lonely. And, in fact, you can log onto an app without feeling connected at all.

In a study published in the American Journal of Health Promotion, researchers decided to look into experiences on social media and learn more about how whether those experiences are positive or negative might impact what researchers refer to as perceived social isolation (PSI). PSI refers to the "subjective experience of lack of companionship and support," as defined by Aging Life Care, so researchers aren't looking to judge if someone is actually alone. Instead, they're looking to see if someone feels lonely.

For the study, researchers surveyed just over 1,100 West Virginia University students ages 18 to 30 about how they use social media, as reported by EurekAlert!. This included asking what percent of their experiences were positive or negative and their own perceived loneliness, as outlined by the study's abstract.

That result didn't come as a surprise to researchers, who wrote in the study's abstract, "These findings are consistent with the concept of negativity bias, which suggests that humans tend to give greater weight to negative entities compared with positive ones."

It's unclear, though, if people who feel lonely are somehow looking for those more negative experiences or if experiencing those things are making them feel more lonely, as Dr. Jaime Sidani, PhD, the study's author, said, per EurekAlert!.

"There is a tendency for people to give greater weight to negative experiences and traits compared with positive ones, and this may be particularly relevant when it comes to social media," Sidani said, according to EurekAlert!. This means that people do note their positive experiences, but their impact doesn't tend to linger. Negative experiences, however, typically stick around in our minds.

A lot of people say they use social media to connect with others, but it seems that its use may sometimes be linked to loneliness, at least in certain circumstances. This doesn't mean you need to flee from social media yourself, but maybe keeping this study in mind will help you be conscious of your own interactions.