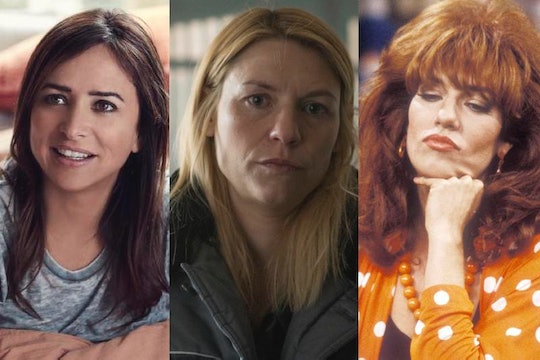 It's been a long road for moms on TV to be depicted as anything more than foils for their hapless and/or evil husbands or vending machines dispensing pat wisdom for their children. But sometimes, there are moms on TV now who are (dare I say it?) bad. But when it comes down to it, a "bad mom" is just a mom who breaks the TV rules. And sometimes people seem OK with that — like when the show is focused on motherhood — and other times people straight up hate it. But this is the kind of rule-breaking TV, and society at large, actually needs.

Excellent motherhood shows like Better Things, Workin’ Moms, and Jane The Virgin provide moms today with laughably relatable mirrors for their own experiences. But there is a time in the not too distant past when people would have called these characters "bad moms." They’re not perfect, but they’re trying, and their (often messy and undignified) struggles are familiar to everyone who feels like they’re failing to live up to hashtag MomLife expectations. These TV moms feel way more fully-developed than, say, Carol Brady on The Brady Bunch or Norma Arnold on The Wonder Years, but these so-called “mom-coms” featuring women who actually seem human are a recent phenomenon. And I would argue they exist thanks to another kind of TV mom — all those supposed “bad moms" who totally recalibrated what a mom can look like now.

"While many television mothers gained greater independence in the workplace, they were seldom excused from the double shift..."

Over the course of television history, on-screen moms have only very gradually worked their way up to having an internal life of any kind. You all know about the earliest American sitcoms, like Leave it to Beaver or Bewitched, which today everyone can see upheld an impossible ideal of what a middle-class (white) American mother should look like. In the 1980s all of this started to change, and sitcoms began featuring single moms, working moms, and even — gasp! — careless moms. But Rebecca Feasey, a senior film and media lecturer at Bath Spa University, argues that while these shows like One Day at a Time, or Who's The Boss certainly changed some things about how moms were depicted, they weren't really interested in challenging the family ideal.

"While many television mothers gained greater independence in the workplace, they were seldom excused from the double shift, meaning that they continued to be held up to implausible and romanticized maternal standards," Feasey tells Romper. Clair Huxtable on The Cosby Show was a lawyer but she was hardly ever shown actually, you know, working. She was mostly shown at home, advising her kids and managing the household.

And then there are the shows in which moms were actively unhappy with their lot. I'm thinking of Married... With Children, Roseanne, and The Simpsons. "These shows were less interested in condemning family values than in challenging earlier incarnations of the contented middle-class unit," Feasey explains. Basically, these shows featured not-so-likable, malcontented middle-class families, but pointed to the characters themselves as the problem, not the nuclear family unit.

It makes sense then that the moms of those shows would, in turn, eventually give way to the sitcom mother of today's incarnation of the family-focused comedy, a woman Feasey terms the "good enough" mom. You have your Claire Dunphys (Modern Family), your Beverly Goldbergs (The Goldbergs), and even, to a certain extent, your Rebecca Pearsons (This Is Us). These moms aren't doing much to interrogate the middle-class family ideal that remains awfully persistent in popular culture, but they do present a more relatable character — a mom who's not always happy and fulfilled but by God she's trying her best.

Another thing that's impossible not to notice is that almost all "bad mom" characters are white. "Women of color on television bear a double burden: to match ideals of motherhood established by white women, and to represent their race or culture in 'positive' ways — both of these expectations diminish the complexity of motherhood as well as of race," says L.S. Kim, an associate professor in the Department of Film and Digital Media at UC Santa Cruz. Basically, she tells Romper, "I do not think that mothers of color have the liberty to be 'bad moms,'" arguing that the freedom to be a little "bad" implies a certain economic and social privilege that pretty much only applies to white women. So while Jessica Huang of Fresh off the Boat and Rainbow Johnson on Black-ish have certainly moved the conversation forward as far as representation of motherhood on TV goes, they don't have the freedom to fail as much as their white counterparts.

But in fact, as much as all of the above characters have contributed to more nuanced portraitures of “mom,” they're still wholly defined in relation to their children and they are still central enough that viewers see their point of view. They are not really, truly “bad moms.” When people say “bad mom” about a TV character and mean it, they’re usually talking about a side character or a woman whose main focus is her job and not her kids.

In sitcoms moms are often parodies: Think about George Costanza's overbearing mom in Seinfeld. In soap operas mothers are conniving and in teen dramas they're toxic (if they exist at all). And in shows like Breaking Bad or The Sopranos moms have been vilified simply because the story is never told from their point of view. Interestingly, in recent years some of these apparently bad moms are getting a bit of a PR makeover (there are several articles written in defense of the cold, correct, and unapologetically classist Emily Gilmore, for example). This seems to suggest that people are ready for a more nuanced depiction of motherhood — or that we just like an underdog. Because the fact remains that characters with children on TV are under a huge amount of scrutiny.

Perhaps Midge's laissez-faire attitude to parenting is intended as a reflection of the normal habits of a rich woman of the time. Or perhaps it's more a sly indictment of the rich double standard that may be rooted in archaic I Love Lucy ideals but is still alive and well today.

Then contrast the Capital M Moms like Jane Villanueva (Gina Rodriguez) on Jane the Virgin and Rainbow Johnson (Tracee Ellis Ross) on Black-ish with female lead characters who happen to have children, but they aren’t her primary focus. For example, take Weeds, a show about a suburban mom, Nancy Botwin (Mary-Louise Parker), who starts selling pot to make ends meet after her husband dies — the original Walter White (Breaking Bad), if you will. But where Walter White’s kids barely rank on the list of things he’s screwed up, viewers could not get over Nancy’s failure to adequately protect her sons. “She'd sell her kids down the river in a heartbeat if it meant some dangerous scenario and a couple of attractive men,” an article in Salon reads.

More recently, The Marvelous Mrs. Maisel follows Midge (Rachel Brosnahan), an aspiring female comedian in the 1950s whose story extends far beyond her two children, Ethan and Esther. To call Ethan and Esther afterthoughts would be generous. Most days Midge seems to barely remember them, and they are almost always left in the care of someone else — her parents, a housekeeper, resort staff. Midge has been called a “bad mom” by viewers and critics, mostly because she doesn’t seem to actually try to be a "good" mom. Midge’s ex and the children’s father, Joel, may be an equally "bad" parent but nobody is giving him any grief for pursuing a life outside of his kids. A writer on Kveller said, “But Midge’s apparent utter lack of concern for her children is something startling — even to me, and I’m writing as someone who similarly delegated childcare to my own parents after my divorce.”

Brosnahan has responded to some tweets calling Midge a bad mother, saying that Midge certainly spends time with her kids not seen on screen, but the show is not about Midge as a mother. Perhaps Midge's laissez-faire attitude to parenting is intended as a reflection of the normal habits of a rich woman of the time. Or perhaps it's more a sly indictment of the rich double standard that may be rooted in archaic I Love Lucy ideals but is still alive and well today. In any case, people are bothered by Midge's apparent lack of maternal instinct.

But these are the moms that are going to drive depictions of women forward. If there were no Peggy Bundy to contrast with Maggie Seaver of Growing Pains, how would we get to Pamela Adlon on Better Things?

There are so many more examples of this. Look at the response to the maternal figures in The Killing. The show revolved around detective Sarah Linden (Mireille Enos), a single mom just trying to do her job without losing it. An article by BtchFlcks enumerates in detail several examples of reviewers complaining about the character's mothering skills.

Carrie Mathison (Claire Danes) in Homeland was clearly rather ambivalent about her own motherhood, but there was a lot more to her character than bottle-feeding technique. Yet many reviewers of that show were wholly preoccupied with her as a "bad mother."

"Carrie shows she is even worse at being a mother than a CIA agent," reads the headline of one Daily Mail review. An article in Yahoo Entertainment reads, "Not only is she completely disinterested in her own baby, but she can barely hold her up correctly — and she's holding the bottle wrong! She should be holding Franny's bottle at more of an angle so the baby doesn't get gas from air bubbles."

And yeah, some of these characters really aren't excellent moms. But these are the moms that are going to drive depictions of women forward. If there were no Peggy Bundy to contrast with Maggie Seaver of Growing Pains, how would we get to Pamela Adlon on Better Things?

It is only by allowing mothers on TV to be “bad,” to fail in some ways at being a mom, that they are allowed to be fully realized characters. I am going to boldly suggest that women are humans. And humans screw up. Shows that get radically real about parenthood like Catastrophe, Motherland, The Letdown, and SMILF all allow moms to be human and fallible and lovable all the same. So it's time that treatment extended to mom characters whose lives and stories don’t revolve around their children: the "bad moms" who more likely than not are only "bad" because they don't play by all the rules. As in real life, some women are ambivalent about motherhood and some women wish they hadn’t had kids. And likable or not, representing difficult moms on TV is one more step toward fully developed female characters.

Sometimes being bad is the only way to get good.