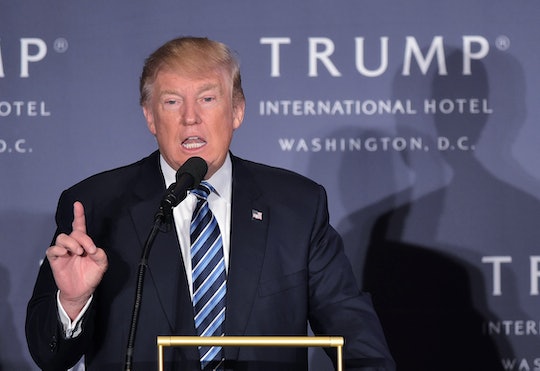 When it comes to Donald Trump's transition into the presidency, there are lots of kinks to work out that other presidents haven't had to deal with. Because he's a businessman, the dynamics of retrofitting a formerly-divisive campaign with the traditional privileges and responsibilities of a world leader have simply been a lot more complex. Take, for example, the fact that Bahrain is hosting an event at Trump Hotel in D.C. next week — a situation that, now Trump is the incoming president, presents something of an ethical dilemma.

The country is planning on celebrating its "national day" and the 17th anniversary of King Hamad Bin Isa Al Khalifa's rule. People were invited by the ambassador to the United States, Abdulla Al Khalifa. If the event were, say, a fountain pen convention hosting an event, there might not be an ethical dilemma to consider. But the fact that a sovereign nation is going to host an event at the president-elect's hotel property is definitely a conflict of interest.

According to Politico, representatives for Trump International Hotel wouldn't comment on the event. Representatives stated that "It’s always been a policy of Trump that we never ever discuss individual guests or groups in the hotel." But as some have pointed out, now that Trump is going to be the nation's president, his company should have to confirm the details of another country using his property for a party, if only for ethics' sake.

Bahrain is an ally, but the relationship is complicated. Bahrain isn't exactly on the up and up when it comes to human rights — it's notorious for jailing journalists and photographers, and people who generally oppose the government. So having them mingle in the president-elect's hotel could send a strange message.

The president-elect needs to confront these conflicts of interests, according to Democrats. Seventeen Democratic members of the House Oversight and Government Reform Committee called on Utah Rep. Jason Chaffetz to start reviewing Trump's finances, tax returns, and also his business ties. But Chaffetz, a fellow Republican, doesn't seem very keen on starting that any time soon, according to NBC News. Senate Majority Leader Kevin McCarthy has also advised Democrats to curtail their pleas for investigation. Trump himself insists that there are no conflicts and has alleged that the media is making too big a deal of any connections he does have.

But already there is a question of his setting up a "blind trust" to rid himself of responsibilities and ties to the Trump Foundation. Since he's handing the keys over to his children, that too could be problematic. A report last week even alleged that when Trump spoke to Argentina's leaders after his win, he sought personal favors about an ongoing real estate project he had going in the country. A The New York Times reporter also claimed that "the chief executive of one of the largest companies in the nation" had planned to book the Trump Hotel in D.C. for events in order to "ingratiate" himself and his business with the new administration. Though no one knows for sure, Bahrain could very well be doing the same thing.

Because of Trump's extensive business dealings, it would be in his best interest to allow Congress to investigate any conflicts of interest and resolve them somehow before Inauguration Day. There's no reason that Trump should allow doors open to mix business and politics.