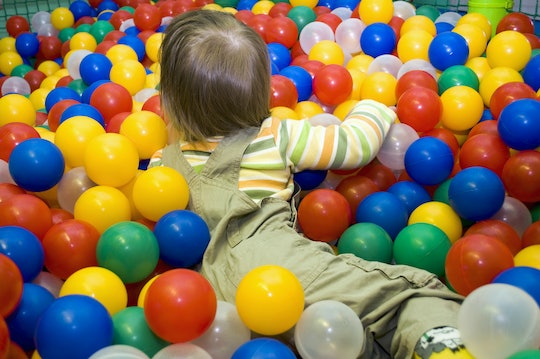 I don't know about you, but whenever I bring my kids back from a place like Chuck E. Cheese, I have the overwhelming urge to bathe them in a tub full of hand sanitizer. All of the surfaces — the games, the tokens, the tunnels, and ball pits — have been touched by roughly 1 million snotty-nosed children. I mean, who knows what types of ickiness are lingering on their hands and clothing. *Shudders* As it turns out, ball pits can contain lots of germs and bacteria that could make your kid sick, a study has found. But don't panic just yet.

So here's what went down. A study from the University of North Georgia randomly selected between nine and 15 balls from six ball pits located in inpatient and outpatient physical therapy clinics in Georgia. Researchers took a much closer look at all of the "fun" gunk on these balls — and then published their findings in the American Journal of Infection Control. According to Science Daily, the study found "considerable microbial colonization" in these ball pits — including eight bacteria and one yeast that could potentially cause disease. “Bacterial colonization was found to be as high as thousands of cells per ball, which clearly demonstrates an increased potential for transmission of these organisms to patients and the possibility of infection in these exposed individuals,” the study read.

But what, exactly, did researchers find? If you're a germophobe like me, then you might want to sit down for this. The study found 31 species of bacteria and one species of yeast. Here's a look at just a few of them, according to Science Daily:

Clearly, some of these clinics aren't doing a very stellar job of cleaning their ball pits, right? That's definitely an issue the study pointed out. “Clinics may go days or even weeks between cleanings, which may allow time for microorganisms to accumulate and grow to levels capable of transmission and infection," researchers wrote.

But wait. Before you swear off all ball pits for the rest of eternity on your kids' behalf, there is a bit of "good" news. As People reported there was "considerable variation in the number of microorganisms between the different ball pit samples," lead researcher Mary Ellen Oesterle explained. She continued:

This suggests that clinics utilize different protocols for cleaning and maintenance, potentially representing a broader need to clarify and establish standards that reduce the risk of transmission.

Yes. Please do get on that. Because there isn't enough hand sanitizer in the world that's going to take care of that cesspool of ickiness. And I have a feeling ball pits at public restaurants/play areas aren't any cleaner than the ones in this study.