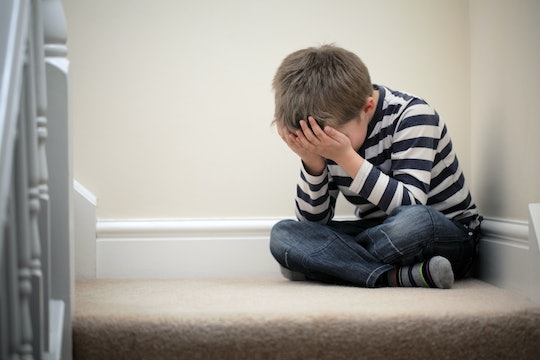 Debates around spanking kids have existed for years, both on and off social media, with many proponents often arguing that they were spanked as a child and didn't turn out too bad. Recent studies, however, are suggesting that spanking has far more risks to consider, and banning it may be better for children altogether. In fact, according to new research, banning parents and schools from spanking is linked to children being less violent. So, it might be time for the United States to take note and follow other countries leads.

Corporal punishment in the United States has a complicated history. In 1977, it was actually ruled constitutional by the U.S. Supreme Court, back in a time when nearly all states allowed it. You might think that it's totally banned today, but that isn't the case. As noted by Quartz, 19 states still allow corporal punishment in schools, such as Texas and Oklahoma.

Meanwhile, the United States only has a partial ban on corporal punishment, according to KIMT3.

In a new study published in the health journal BMJ, researchers decided to look into the effects corporal punishment has on children across the world. As reported by The Independent, the study analyzed data from 88 countries. The study used data from two ongoing global surveys: the Health Behavior in School-Aged Children and the Global School-based Health survey. The Global School-based Health survey interviews children between 13 to 17 about various social topics, including violence, according to the World Health Organization.

For the purpose of the study, CNN noted corporal punishment was defined as "an adult's use of physical force to 'correct or control' a child's behavior. The punishment is meant to be painful but not to physically injure."

Noting the significance of a full ban is extremely validating. One of the major arguments for corporal punishment is that it's necessary to teach kids right from wrong. If that were true, as pediatrician Dr. Robert Sege, who wasn't involved with the study, explained to CNN, "you would expect the international outcome to be more violence among youth once a country bans corporal punishment. That is not what the evidence here is saying."