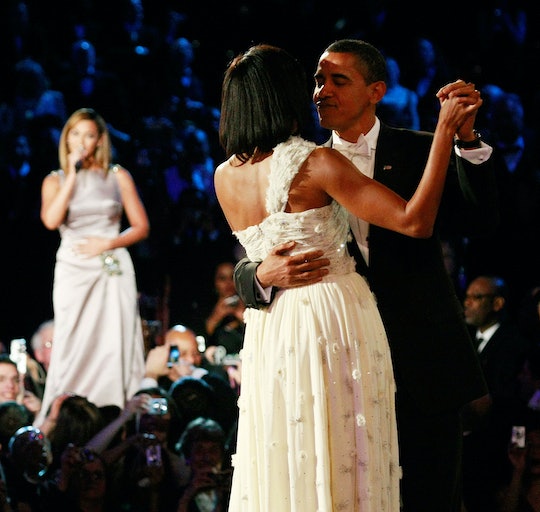 A year and a half after leaving the White House, it's clear that the Obamas are still loving their retirement. Saturday night, President Barack Obama and Michelle Obama attended Beyoncé and Jay-Z's concert in the Washington, DC area, and fans captured the former first couple on camera, enthusiastically dancing the night away.

Based on videos shared on Twitter, Barack and Michelle were seated (rather, standing) in a box, away from the throngs of people below them. To the tune of Jay-Z rapping (and fans screaming), the couple rocked the hell out, showing off some serious dance moves. It's pretty funny to see so many audience member's phones turned away from the stage in an attempt to capture Barack and Michelle's dancing on camera.

Many fans of the Carters and the Obamas who attended the show at FedEx Field in Landover, Maryland took to Twitter to share their excitement about being in the same room as four iconic living beings. "Obama is at Beyoncé’s concert I wanna cry 😭 I'M BREATHING THE SAME AIR AS MY PRESIDENT," one concertgoer tweeted. "So I'm at a Beyoncé concert waiting for the queen and her husband to come out and I see people turning around and losing their s h i t," another attendee wrote on Twitter during the show, "and [I] turn around and see THE. FUCKING. OBAMAS. just chilling like 30 ft behind me. breh."

Based on the videos, it's clear that both Michelle and Barack can certainly boogie —  but, as they've both agreed on in the past, Michelle is definitely the stronger dancer. While campaigning in 2008, Barack appeared on The Ellen DeGeneres Show, where the host played clips of both both Barack and Michelle dancing on her show in the past. "You have 20 seconds to respond to this clip," DeGeneres told Barack via satellite. "Michelle may be a better dancer than me, but I'm convinced I'm a better dancer than John McCain," Obama jokingly retorted, referencing his competitor at the time.

And in another The Ellen DeGeneres Show appearance in 2015, Michelle once again proved that she's got some mad dance skills. She, DeGeneres, and a crew of dancers performed a choreographed dance to "Uptown Funk," and Michelle honestly killed it. Then, in 2016, the couple showed off their dance moves together at a Halloween event at the White House, ABC reported.

And on top of the couple's past history busting moves, they also have a history as fans of Beyoncé and Jay-Z. During the 2009 inaugural ball following Barack's swearing in ceremony, Beyoncé sang Etta James' "At Last" during the couple's first dance as president and first lady. And in 2013, during Barack's swearing in ceremony for his second term as president, Beyoncé performed the national anthem.

During a 2013 event at Jay-Z's Manhattan nightclub, 40/40 Club, Barack sang both Beyoncé and Jay-Z's praises. He told the crowd, according to the Huffington Post:

To J and B, thank you so much for your friendship.... Beyoncé could not be a better role model for my girls because she carries herself with such class and poise and has so much talent.

Not to mention, in July 2016, Michelle was the guest of honor on James Corden's Carpool Karaoke. Michelle joined the host in singing a few of her favorite songs, including Beyoncé's "Single Ladies," complete with dance moves from the song's music video and an expert delivery of each and every lyric.

Plus, the respect and adoration between the couple goes both ways. Beyoncé has expressed her love for Michelle on multiple occasions. For example, in 2012, Bey wrote a letter waxing poetic about Michelle for Barack's reelection campaign. "I am proud to have my daughter grow up in a world where she has people like you to look up to," Beyoncé wrote at the time, the Huffington Post reported.

Bey said it best — I am lucky to live in a world where I have Barack Obama, Michelle Obama, Beyoncé, and Jay-Z to look up to.