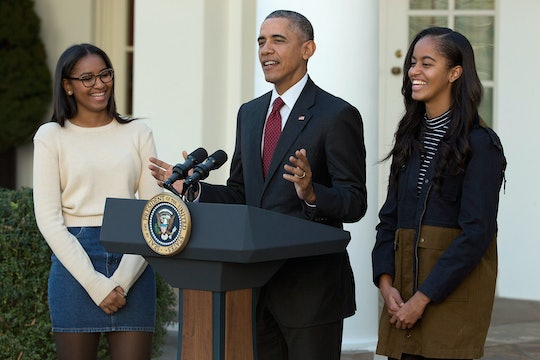 Barack Obama Is The First President To Call Himself A Feminist, & That’s A Crucial Legacy

In an essay for Glamour, President Obama called himself a feminist and talked about how his feminism has affected his position as a father and his time in the White House. New York Magazine reported in June that Obama was the first sitting president to declare himself a feminist, so this essay only helps to cement that important and historic declaration. With a woman closer to the White House than ever, his words couldn't have come at a more critical time.

Feminism may be having a moment in the media, but it's struggled to find its way into politics. The Equal Rights Amendment first entered the national conversation in 1923; according to CNN, legislators wanted to ensure that the Constitution protected women against discrimination and specifically secured their rights. Congress didn't pass it until 1972, but the required 38 states didn't ratify it; the amendment effectively died in 1982. Though individual politicians over the last three decades championed women's issues and got critical pieces of legislation passed, there hasn't been a unified political front in the fight for gender equality. In his Glamour essay, Obama acknowledged that there's a great deal left to fight for, adding that policy must change alongside hearts and minds. Despite the ground left to cover, he said that the hope offered by incremental progress over the last century is empowering:

The progress we’ve made in the past 100 years, 50 years, and, yes, even the past eight years has made life significantly better for my daughters than it was for my grandmothers. And I say that not just as President but also as a feminist.

It's deeply meaningful for a sitting president to declare himself a feminist, but just as important is the way that he did it. Many of feminism's detractors criticize the movement as myopic; even the term "feminism" itself can feel, to some, exclusionary. Obama challenges that perception in his essay, perhaps most meaningfully by embracing intersectionality. The concept and definition of intersectionality emerged in 1989, The Telegraph reported. Professor Kimberlé Crenshaw defined the term:

The view that women experience oppression in varying configurations and in varying degrees of intensity. Cultural patterns of oppression are not only interrelated, but are bound together and influenced by the intersectional systems of society.

Obama recognizes that feminism only works when it works for everyone: that being a strong advocate for women's rights requires a thorough understanding of the realm of challenges women face that are compounded by, but not limited to, their gender. He gave First Lady Michelle Obama as an illustration of the unique obstacles facing women of color:

We need to keep changing a culture that shines a particularly unforgiving light on women and girls of color. Michelle has often spoken about this. Even after achieving success in her own right, she still held doubts; she had to worry about whether she looked the right way or was acting the right way—whether she was being too assertive or too 'angry.'

Obama also called on men to embrace feminism, not just to support women but to create a more inclusive culture for individuals of all gender identities. In an essay for The Atlantic, Noah Berlatsky explained why feminism benefits men:

In his essay, Obama explained that women should not be bound to the traditional ideals of femininity, and, at the same time, men should be free to show emotion and sensitivity:

By calling for an accessible feminism, Obama opens up the possibility that future generations will see equality as a given, not a topic for debate. In an article for Ebony, "Why More Black Men Must Be Feminists," Wade A. Davis, II summarized the results of talks he'd had with men about gender equality. Though not all of his interview subjects felt comfortable applying the label to themselves, there was one major reason many embraced the conversation:

Men explained that from Hillary Clinton to Michelle Obama to Beyoncé and even the Oscars, they were many reasons to discuss gender equality and feminism. But the one answer that men stated the most is that feminism/gender equality is important is because they have a daughter. The men who had daughters were triggered to interrogate their own issues of consistency when it comes to being a true gender equality advocate.

Obama wrote frequently about his daughters, Sasha and Malia, in his essay. One takeaway, he explained, is that men should be as inherently committed to feminism as women:

Michelle and I have raised our daughters to speak up when they see a double standard or feel unfairly judged based on their gender or race—or when they notice that happening to someone else. It’s important for them to see role models out in the world who climb to the highest levels of whatever field they choose. And yes, it’s important that their dad is a feminist, because now that’s what they expect of all men.

An argument for the importance of feminism from a sitting president comes at a critical time when Democratic presidential nominee Hillary Clinton is closer to the White House than any woman before her. Clinton sparked an international conversation about feminism during her 1995 speech in Beijing during the United Nations Fourth World Congress on Women, according to The New York Times. Her famous line, "Human rights are women’s rights, and women’s rights are human rights," still finds its way into political discourse today. Two decades later, Obama is doubling down on that declaration.

Even with a feminist leading the United States, moving meaningfully toward a more equitable nation requires the commitment of individuals across the country in all sectors of society. Laura Ciolkowski, PhD is the Associate Director of the Institute for Research on Women, Gender, and Sexuality at Obama's alma mater, Columbia University. She told Romper that advancing gender equality requires investment, vigilance, and advocacy from all Americans:

Let’s follow the President’s lead by continuing to call out individual attitudes about gender and identity that support the status quo (sexist and racist attitudes and stereotypes harbored by others as well as those we are burdened with ourselves); but let’s also insist on connecting individual attitudes to larger patterns, and let’s continue to call out and boldly challenge in our feminist work the deeper systems of power and the institutional structures – not just law, but also medicine, education, employment, housing – that continue to keep gender and racial inequality, even in the era of Obama and Hillary Clinton, alive.

As Obama wrote in his Glamour essay, he'll keep working on changing policy, but "...the most important change may be the toughest of all—and that’s changing ourselves."