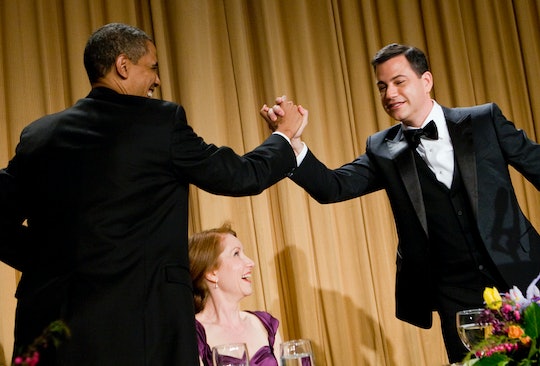 Ever since late night host Jimmy Kimmel spent his Monday night opening monologue talking about how his newborn son William nearly died, the internet has been ablaze with responses. On Tuesday, Barack Obama responded to Jimmy Kimmel's story about his son on Twitter. Besides being perhaps one of the most high profile people to weigh in on Kimmel's emotional monologue, Obama's response was necessary, too — and not just because half of American votes wish Obama was still in office.

Kimmel jumped into America's health care debate in a very public way with his monologue, by using his platform to make an emotional plea for affordable health care access for all. While never mentioning the Affordable Care Act, Obamacare, Trumpcare, or the American Health Care Act by name, Kimmel made it abundantly clear that no American should ever have to put cost over the life of their own child. The ACA was Obama's signature piece of legislation, something that defined his presidential legacy — so it only makes sense that Obama would chime in on what Kimmel had to say, even after a weeks-long absence on Twitter.

Kimmel has done something very important: He's managed to get America talking about the health care debate again at a critical time when the GOP is doing everything it can to try and repeal the ACA.

Even though Republicans' first attempt to repeal Obamacare failed in March, President Trump made it clear that "Obamacare is dead" in a series of tweets on Sunday, when he again pushed that a replacement health care plan was coming soon. On Monday, a White House official told CBS This Morning that a vote to repeal the ACA could happen this week. Then, CNN reported Tuesday afternoon that House Speaker Paul Ryan doesn't have the votes — again. "Obamacare is the law of the land... for the foreseeable future," Ryan said in a March 24 press conference after having failed to secure enough votes for the GOP's first pass at a replacement bill. Now, just over a month later, Ryan faces the same shortfall.

Look, I get it. It's easy for Americans to just glaze over at news surrounding health care, especially after Trump's relentlessly exhausting first 100 days in office. But Kimmel's monologue on Monday night was the huge wakeup call we all needed — and Obama's response only validated the fact that Americans need to step up and do something if they want to keep the coverage they want and need. A majority of Americans still want Obamacare, according to a March poll from Monmouth University.

In his monologue, Kimmel thanked Congress, as Monday it voted to increase funding for the NIH rather than slash it as Trump hoped it would in the latest budget deal. But Americans need to tell their congresspeople more than just thank you — they need to tell their representatives to vote against repealing the ACA.

If affordable access to health care is important to you, the time to act is right now. That's right: It's time to pick up those phones again and call your representatives. Tuesday is a national call in day for health care advocates, and calling your representatives does make a difference. If Ryan doesn't get the votes, then the GOP will have to head back to the drawing board until they can get health care right.

At the end of the day, while Kimmel's story is moving and powerful — and even got some major street cred when Obama tweeted out his support — this isn't just about Jimmy Kimmel. This is about every American's basic human right to affordable, accessible, quality health care.