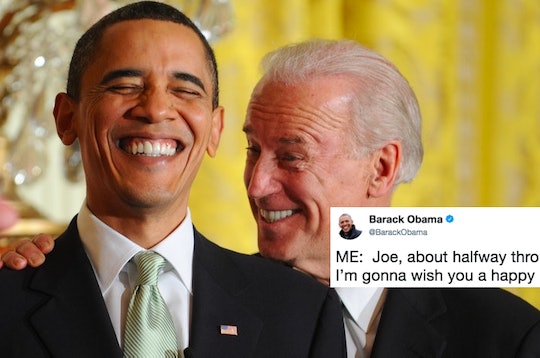 The internet's favorite bromance is back, and better than ever. Forget Steve and Dustin from Stranger Things — what the world needs now is more Barack Obama and Joe Biden. Luckily, in the midst of our current garbage political situation, the 44th president posted the most delightful tweet to wish his former partner-in-governance a happy birthday. Barack Obama's birthday message to Joe Biden will have you laughing, and then desperately looking for some sort of constitutional loophole to get this duo back into the White House.

Ah, remember when the president and vice president of the United States didn't just tolerate each other, but actually fell in brotherly love? Biden and Obama were unlikely BFFs, with Obama the calm and collected authority to Biden's loose cannon. They cracked each other up. They made each other cry with unexpected gestures. (Go re-watch Biden tearing up when Obama awarded him the Presidential Medal of Freedom, and just try to hold back your own tears.) They had enough chemistry to co-star in a buddy cop movie, so why has that not happened yet?

The internet meme-d the crap out of them. And when Biden turned 75 on Monday, Obama proved that he could get in on the meme game too, posting a picture of the two of them, with a caption that turned from hilarious to heartwarming.

I'm personally a big fan of Obama's interpretation of what's going on in the photo, and am happy to believe that things went down exactly like he says they did. But for those who want to know the true story behind Biden's adorable finger-point at the 2014 State of the Union address, the former VP told late night host Seth Meyers what was really going on in the now-infamous picture, saying:

As we're walking over, a senior senator said, "Now look Joe, I know you and Barack are friends, but don't stand up on every damn thing he says." And I said "alright," and then I counted. 17 times this particular senator stood up in front of the president. So I went like this to point to him. Talk about a suck-up.

Needless to say, people went wild for Obama's birthday message. Twitter quickly filled up with pleas for the two men to come back, as well as expressions of admiration that Obama had managed to bone up on his Twitter game in between all the kite-surfing with Richard Branson and responding to President Donald Trump's threats to important programs like DACA.

I think I'm remembering how it feels to believe in goodness and joy again. But can I get a quick reminder of how Biden celebrated Obama's 55th birthday on Twitter?

Oh, that's right. With a picture of JOE AND BARACK FRIENDSHIP BRACELETS and the words, "A brother to me, a best friend forever." My heart is so full of love, it hurts.

Now seems as good a time as any to take a little tour back through some of the best Obama Biden memes. Of course, there's more Biden pointing:

Then, there are all the gems that managed to introduce at least a momentary bit of laughter into those final days of the Obama presidency, as he and Biden prepared to hand the reins over to Trump and Vice President Mike Pence:

And apparently, while Biden loves all the memes, one of them has a special place in his heart. Ashley Biden told Moneyish that when her father first learned about the viral memes, he "sat there for an hour and laughed." Then he picked his favorite. Of course it's the one where he and Obama are hugging real hard:

But now that Obama has learned how to play the meme game, I wouldn't be at all surprised if Biden has a new favorite.