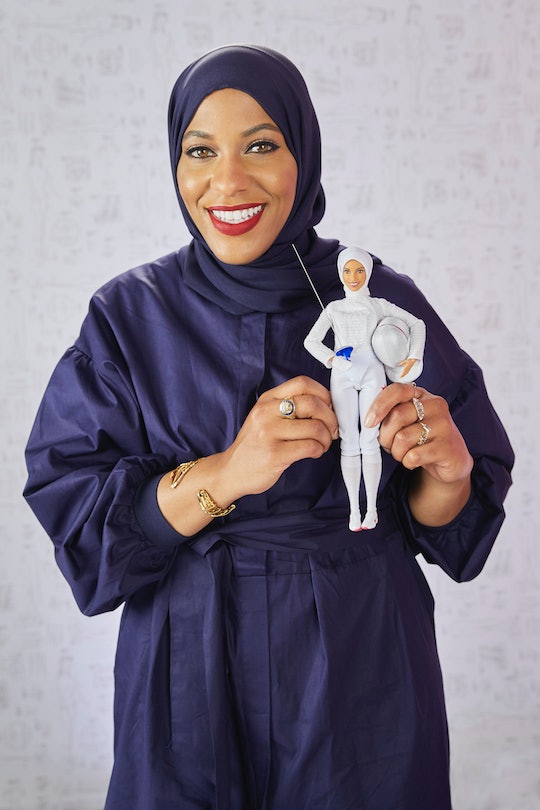 Since 2015, Mattel has put a lot of effort into making its Barbie dolls more representative of all American women. To achieve this, Mattel started the Shero Barbie campaign, a movement that honors impressive and groundbreaking women from a variety of backgrounds. Women like Ashley Graham, Ava DuVernay, and Eva Chen have all been honored with Barbies designed in their likenesses. On Monday, this year's Shero Barbie was awarded to Ibtihaj Muhammad, the first American to compete in the Olympics while wearing a hijab, according to Teen Vogue. Following the news, people took to Twitter to praise Barbie for *finally* introducing its first hijabi doll ever.

At the Glamour Women of the Year Summit on Monday, Graham, the 2016 Shero Barbie recipient, presented Muhammad with her very own Shero Barbie. The special Barbie depicts Muhammad in her fencing uniform (Muhammad is an Olympic fencer), which includes her fencing mask, sabre, and of course, her hijab.

It goes without saying that Muhammad's Shero Barbie is a huge step forward for inclusivity and for young hijabi girls everywhere, especially given the recent and deeply frightening Islamophobia in America. In 2016, hate crimes against Muslims increased by 20 percent, according to Vox, and President Donald Trump regularly makes offensive and false remarks about Islam. Not to mention many Muslim women in America are afraid to wear their hijabs in public for fear of being physically or verbally attacked, according to Seventeen, which is another reason why Muhammad's Barbie is so crucial and overdue. Hijabi women need more representation ASAP, and one can only hope that many other influential role models like Muhammad will be honored and recognized for their talents.

Muhammad said of Mattel's honor and its importance, according to People:

I think its revolutionary for Barbie to take a stand in this moment that we’re in – and I would say, as a country, to have a doll wear a hijab and be the first of its kind. There has never been a Barbie doll to wear a hijab before. I’m really excited to have this moment happen in my life and also for all these little girls now who can shop for Barbie doll that may look them, may wear a hijab like they do, or like their mom does, or like a friend does. But also have kids who aren’t Muslim, who don’t wear a hijab, to also have the opportunity to play with a doll that wears a hijab.

Muhammad brings up an excellent point here. This isn't just a critical moment for Muslim girls — it's a teaching moment for all children. All kids need to see diversity celebrated and present in their everyday lives, because embracing a variety of backgrounds early on tends to shape kids into accepting and culturally sensitive adults.

Barbie is celebrating Ibtihaj not only for her accolades as an Olympian, but for embracing what makes her stand out. Ibtihaj is an inspiration to countless girls who never saw themselves represented, and by honoring her story, we hope this doll reminds them that they can be and do anything.

As for the public's response, many people on Twitter have commended Mattel for taking this huge step forward, while others have wondered why it took the company so long (Barbies have been in existence since 1959) to represent Muslims:

Although it's great to see the first ever hiabji Barbie doll, it's worth noting that many industries still lack adequate diverse representation of black, Hispanic, or Muslim people, for example. It's important that more people, especially parents, call for companies like Mattel to incorporate more diversity into their products and stores. It's high time that hijabi dolls become commonplace as opposed to anomalies.