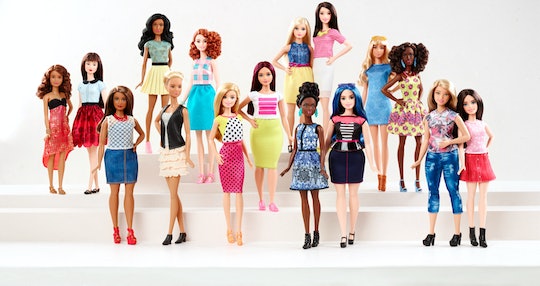 Barbie Is Finally Available In 3 Body Types, Because Women Come In More Than One Shape

Beginning this week, Barbie will be available in shapes and sizes that look... well, a lot more like the average adult woman. Mattel, the maker of Barbie, announced plans to make the iconic Barbie doll available in three new body shapes — petite, curvy, and tall — and with a variety of new skin tones, eye colors, hairstyles, and looks. And Barbie fans won’t have to wait very long to get their hands on the new line of dolls. The new line of Barbies goes on sale beginning Thursday at Shop.Mattel.com, according to the official press release. Mattel expects the toys to go on sale at major retailers this spring.

Of course, the idea of tinkering with Barbie’s signature look is nothing new. Women and girls have been railing against Barbie’s unrealistic body proportions and monolithic look for almost as long as the doll has been on store shelves, according to USA Today. In 1968, Mattel launched the first black Barbie, named Christie, to help bridge the racial divide at the time. In recent years, Barbie’s creators have given her less makeup, a younger look, and added articulated ankles (so she can finally slip into a pair of cute flats, because who in the heck wears heels all the time?!). It was only a matter of time before Mattel would begin to seriously consider changing Barbie’s body shape to better match how women actually look.

The team behind Barbie’s new, more inclusive look took cues from everyday culture, according to TIME. Kim Culmone, head of design at Barbie, said the team looked at the brand as if it were starting it over today, rather than simply updating the original doll from 1959, according to TIME:

We said to our teams, ‘If you could start the brand over today and you didn’t have any rules, you could do whatever you wanted, what would you do?' The answer was greater diversity—in terms of skin tone, hair color and texture and finally body size.

The big question is whether young fans will welcome the changes. Girls as young as 6 or 7 years old are already conditioned to embrace certain body shapes and shun others, TIME reported. Barbie General Manager Evelyn Mazzocco, who has three young daughters herself, told TIME that providing more than one silhouette makes a difference, even if the children are too young to appreciate it:

I do all kinds of things for my kids that they don’t like or understand, from telling them to do their homework to eating their vegetables.This is very similar. It’s my responsibility to make sure that they have inclusivity in their lives even if it doesn’t register for them.

The announcement will certainly open up new commercial possibilities for Mattel. If a parent buys a new curvy Barbie — and maybe a petite one, because petite women rock, too — they’ll also need to invest in an whole new wardrobe. Well, actually two new wardrobes. You see, Mattel has launched new, appropriately sized clothing and shoe lines right along with the new dolls. And, just like in real life, the curvy doll will have trouble fitting in clothes made for the petite version, and vice versa.

Still, there’s plenty for parents to get excited about in the new Barbie line. One of the reasons Barbie has had such staying power on toy shelves is that she’s essentially a blank canvas: kids can create as many stories and ways to play as their imaginations allow. Adding new faces and bodies only adds new possibilities to those stories and reminds kids that there are people with other perspectives and experiences in the world.

Not everyone looks the same, but somehow there’s room for everyone to play.