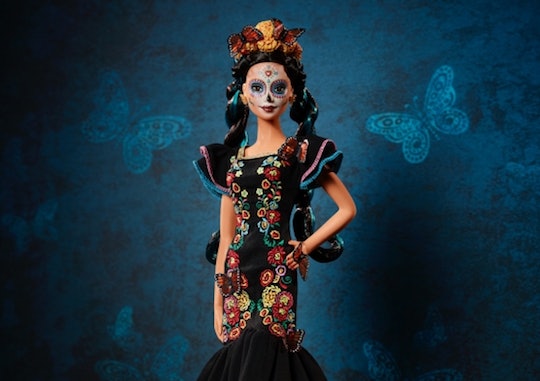 One of your favorite childhood icons has a spooky new look, and just in time for next month's holidays. Though Barbie dolls throughout the decades have taken on various professions, outfits and hairstyles, an exclusive edition from Mattel might prove to be one of her most incredible yet. Indeed, Barbie's new Dia De Los Muertos doll will be available in a matter of days, so be sure to grab your exclusive limited edition as soon as possible.

The Día De Los Muertos Barbie doll will be released in limited quantities prior to the upcoming Mexican holiday, as People reported. The doll has long, dark hair that's braided down her back, as well as the traditional colorful "skull" makeup painted on her face. As for her outfit, Barbie is seen in a long, black trumpet gown which is also embroidered with a traditional cultural pattern. To complete the look, Barbie is accessorized with butterfly applique on her skirt and hands, as well as a headpiece that matches her dress. Altogether, it's an incredibly elegant look, one that is really visually appealing.

Mattel confirmed to Romper that the doll will be available exclusively at Walmart.com and Amazon.com beginning this Thursday, Sept. 12, and currently retails for $75.

Dia de los Muertos, translated as the Day of the Dead, is a holiday rooted in Aztec tradition, according to NBC News. It begins each year on Nov. 1 — which correlates with All Saint's day — however, the belief is that this is the time of year during which the veil between the spiritual world and our world is thinnest.

To celebrate the holiday, given the belief that those who have died travel to Chicunamictlán, the Land of the Dead, the holiday serves as a chance to honor those who have passed, and to aide them in their journey, History.com explains. To do this, people will provide food, water and tools, leaving offerings at loved one's graves, or on makeshift altars called "ofrendas" that are set up at home.

The symbol you may be most familiar with when it comes to Dia de los Muertos is the painted skeleton face, which is seen on the new Barbie. Mexican-American face-painter Judith Bautista told Allure that the design is actually called a calavera de azucar, or a sugar skull, given that the design is traditionally done with sugar paste. She also explained that the practice is not meant to be scary, telling the magazine: "When the kids say, ‘That's scary,’ I ask, ‘What about a skeleton is scary? You're a skeleton and I'm a skeleton. We're all skeletons. It's just another phase of our lives to become skeletons.'"

The doll is aimed to "honor the traditions, symbols and rituals often seen throughout this time," Mattel told CNN in a statement. However, it also serves as a way to further diversify and offer representation to different cultures, customs and people throughout the world.

Representation in everything from media to beloved children's toys is essential. Other than being a beautiful doll, hopefully this edition of Barbie can also inspire conversation about the holiday, its origins, and the people who celebrate it today.

More Like This
New Study Finds Brains Of Teens Who Lived Through The Pandemic Aged Faster
How Old Should Kids Be Before They Watch The 'Christmas Story' Sequel?
Rubble From 'PAW Patrol' Is Getting His Own Spinoff Series Full Of "Messy Demolition"
David Harbour Transforms Into A Santa No Kid Wants To See In 'Violent Night'