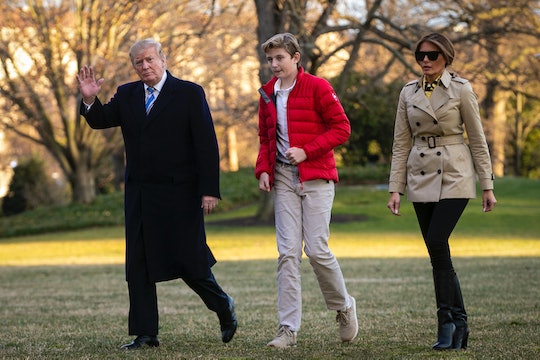 Mongolian President Khaltmaagiin Battulga topped off his visit to the White House earlier this week with a symbolic gift to Donald Trump's youngest son. According to the White House, Barron Trump was gifted a traditional Mongolian Horse. But don't expect to see the president's 13-year-old son galloping his new horse across the White House lawn anytime soon. The White House has said the horse won't live with the First Family, but will instead remain in Mongolia.

"The First Family is very grateful to Mongolia for this time-honored traditional gift," White House Press Secretary Stephanie Grisham said Wednesday in a brief statement shared on Twitter alongside a photograph of the horse. "The horse has been named 'Victory' and will remain in Mongolia."

According to NBC News, President Trump was overheard thanking Battulga for the horse as the two leaders walked from the White House residence to the Oval Office on Wednesday. The news outlet reported Trump said he'd seen a picture of Barron's new horse and called it "beautiful."

Well-known for their horses, the Mongolian government has made it something of a tradition to gift them to U.S. dignitaries. In fact, Reuters has reported that former Vice President Joe Biden and former defense secretaries Chuck Hagel and Donald Rumsfeld were all symbolically gifted Mongolian horses.

According to CBS News, Biden received his horse in 2011 while attending a "mini-Naadam" festival in Mongolia. He later told reporters he'd named the animal "Celtic" as an homage to the codename he'd been given by the Secret Service but wasn't sure how the name had gone down as the horse had "reared up" on him when he'd told it the new moniker.

Awkward first impression aside, an aide for the former vice president told reporters that Biden was well aware of the significance behind the gift. "The horse is the most important animal in Mongolia, it is the lifeblood of the country['s nomadic history], so giving a horse is one of the most meaningful gifts that can be given," CBS News reported Biden's aide said. Although Biden ultimately returned to the United States, his horse remained behind in Mongolia, the news outlet reported.

Hagel and Rumsfeld, who named their Mongolian horses "Shamrock" and "Montana" respectively, also reportedly chose to keep their gifts in Mongolia rather than work out the logistics of transporting them home. In fact, it was the complicated logistics of getting a gift horse home that reportedly spurred former President George W. Bush to delicately sidestep being given his own horse during a visit to Mongolia in 2005. According to The New York Times, the then-president framed his visit as an important international mission for Rumsfeld. "Secretary Rumsfeld asked me to check on his horse," the paper reported Bush said in his speech.

What's more, Barron isn't the only presidential child to have ever been given a horse while residing in the White House. According to NBC News, Caroline Kennedy, then 5, was gifted a horse she named "Macaroni" from then-Vice President Lyndon B. Johnson.

Like Barron's new horse "Victory," "Macaroni" was also boarded outside the White House grounds (although Virginia is far closer than Mongolia). Still, perhaps a trip to Mongolia, and a ride on "Victory," lies in Barron's future.