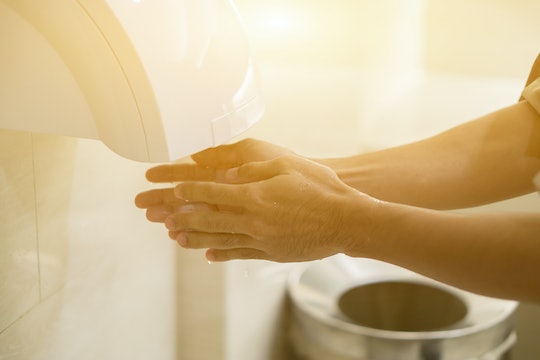 New Study Finds Bathroom Hand Dryers Are Blowing Poop Particles All Over You & OMG... What?!

As if life wasn't already hard enough, a new study has found that bathroom hand dryers blow poop particles all over you, making the entire experience of going to the bathroom in public all the more troublesome. Et tu, hand dryer? As if the world needed one more thing to worry about. Automatic hand dryers are supposed to be all about hygiene, but that is apparently not the case at all, as this new study has found. Since you don't have to touch them to make them work, it should be one, confirmed place where your hands aren't collecting germs in the very over-trafficked public bathroom, right?

It starts by you hovering over the seat to pee, you do your best not to touch anything but toilet paper, then make use of your underemployed elbow to cue the water and soap once you're out of the stall. And then... you get one glorious moment of cleanliness in public by hovering your hands under the hand dryer. If anything, I always thought the heat might even get rid of any unnecessary germs because I wasn't very great at science as a child. Who knew how wrong I was.

According to this new study published in the journal of Applied and Environmental Microbiology, everything I ever thought about hand dryers is wrong. The study was done in three separate bathrooms at the University of Connecticut, where researchers put "special plates" under the hand dryers in bathrooms for a mere 30 seconds. Get ready, friends, because this might make you never want to leave your house again.

The scientists found, according to Yahoo! News, that after testing the plates, "they showed between 18 and 30 colonies of bacteria on them." They compared the air in bathrooms without hand dryers, according to Newsweek, and the verdict was in: Hand dryers are spewing poop particles onto your hands.

What does that even mean? Poop is everywhere, apparently.

Yup. Apparently, when you flush a toilet full of poop, little particles fly off, according to Self. They're in the air and since hand dryers are creating energy when they're turned on, they can suck in those fecal particles, keep them (because the environment is warm inside the dryer, which is particularly gross) and toss them right back onto your gorgeous, clean, probably moisturized hands. It's science, folks, and it's not pretty.

The actual worst part about this might not be that hand dryers collect and then blow poop onto your hands, but that feces is somehow circulating in the air of a public bathroom to begin with all the time, and not just in University of Connecticut bathrooms. It's everywhere, even your adorable bathroom with cute, seasonal, hand towels from Target and fancy smelling soap. Are you ready for this? Break out the bleach.

A 2015 study published in the American Journal of Infection Control found that all sorts of bacteria that comes out of our bodies can live in a toilet for way too long, in my opinion. It found that E. coli lasts for four to six hours in the air after flushing and salmonella can chill out for almost 50 days even after you flush, and even after you might spray or use some sort of "every flush" tablet to clean it out. Listen, I'm not thrilled about this either.

Both of those bacteria can hang onto toilet bowl cleaners, too, according to the study. The same study found that Clostridium difficile, which causes stomach pain, fever, and fatal infections, hovers in the air for a full 90 minutes after flushing.

Here's the deal though. All of those bacteria are in the "plume" of your flush which is going to happen no matter what. If you poop, those go in the air. Which means you've been breathing it in all of your life (sorry). It would take a lot of breathing in that "plume" to actually get sick, which is why people in developing countries tend to get sicker. It's all about how efficiently you can flush waste that can determine the air quality of a place.

That's why here in the United States, there are regulations like the Federal Energy Policy Act of 1992, which makes it so that our American toilets can flush six liters at a time, therefore making the plume a lot less toxic than other toilets and water systems that can't handle that much water. If you can flush more, there are less poop particles. But you do waste more water. It's a trade off developed countries have made.

Water pressure is about a lot more than just your morning shower, it can actually ensure that waste is taken care of efficiently so less of it flies into the hand dryer out at the restaurant or onto your toothbrush at home. (Oh, yea, that happens, too.)

So what can you do aside from never walking into a bathroom ever again, let alone that of a complete stranger? If you can, flush the toilet at home with the lid down. Clean your toilet bowl, and replace the toilet bowl brush often so you're not just cleaning you-know-what with...well, let's just leave it at that. And when out in public? Use your own hand sanitizer and wipes, because that hand dryer is apparently just a feces magnet.