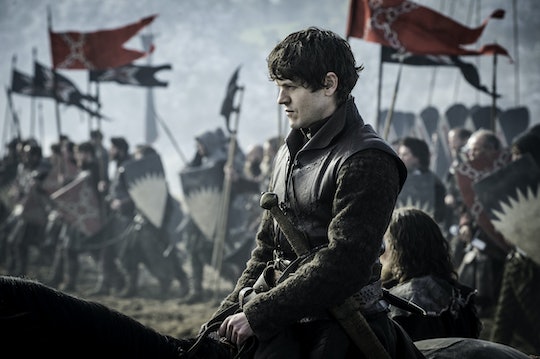 Nearly every year on Game of Thrones there's an epic battle (or other big, game-changing event) in one of the last episodes of the season (usually the ninth episode). In Season 1's "Baelor," Ned Stark, the de facto protagonist, was beheaded. In Season 2, Tyrion commanded the Lannister army in its defense against Stannis' forces in "Blackwater." The third season featured a certain traumatizing wedding which still haunts our collective nightmares. Season 4's "The Watchers on the Wall" focused on the Wildling attack, in which Ygritte died in her know-nothing beau's arms. In the fifth season, "Hardhome" gave us the epic battle between Jon's Night's Watch group/the Wildlings and the White Walkers' army of wights. This time around, the aptly named "Battle of the Bastards" is the season's big event, as Sansa and Jon lead an army against Ramsay Bolton (formerly Snow) to retake Winterfell in the series' biggest battle yet.

I think I can speak for the collective Game of Thrones fandom when I say that we all want Ramsay to finally bite it. The smarmy sadist has been pure evil ever since he was introduced. He spent almost all of the fifth season torturing Sansa and Theon. Basically, he's the worst, and he's got to go.

Of course, this show has never been one to deliver exactly what fans are hoping for, so who knows whether Ramsey's reign of terror will come to a final and satisfying end? This hasn't ever been a straightforward "good guys uniformly triumph and everybody celebrates with ale and good tidings" kind of series.

The Thrones fandom being what it is, plenty of theories (both promising and terrifying) have emerged in the lead up to the penultimate episode of this great season.

Littlefinger Shows Up With Reinforcements Just In Time

This theory seems pretty much guaranteed to happen. In fact, as Reddit user Majestic_Beast puts it, it'll be disappointingly predictable if Baelish just rides in and saves the day as expected. We've already seen Baelish earlier this season convincing little Robin, the Lord of the Vale, to send reinforcements to assist Robin's cousin Sansa. We've also seen him profess his allegiance and apologies to Sansa, so we know he's desperate to somehow make amends for allowing her to marry/be abused by the horrid Ramsay. Then, Sansa wrote a mysterious letter to someone, and an intrepid Redditor named CreepyPancakes traced it over and seems to have proven that it was a letter to Littlefinger.

The Blackfish Shows Up With Reinforcements Just In Time

Realistically, there is no way that Jon and Sansa could defeat Ramsay's army with the numbers they have. It's just not possible. Somebody needs to ride in mid-battle with extra fighting men and ammunition. It's just a matter of who.

If it's not Littlefinger, it might be the Blackfish, Sansa's great-uncle. He was supposedly killed during Jaime's re-taking of Riverrun, but we didn't actually see it happen. We just got some rando Lannister soldier telling Jaime that the Blackfish was killed while fighting. Plus, we'd just seen Brienne explaining to him that Sansa needed his assistance in gathering the necessary forces for the fight against Ramsay's men. It wouldn't be as predictable as Littlefinger showing up, but it would still provide the troops that Jon and Sansa realistically need.

The White Walkers Show Up And Just Kill Everybody

OK, so, this one (posited by user JamesD2020 on an ASOIAF forum) is a little dark. It's also not very likely that the White Walkers would so suddenly make it past the Wall (offscreen, too) – but it would be pretty epic, wouldn't it? The White Walkers and their army of wights suddenly descending, either during or immediately after the battle. If this happens, I'm basically fine with it, assuming that they rid us of Ramsay and leave Sansa, Jon, Davos, Tormund, and Lyanna Mormont alive. I mean, the White Walkers were going to make it past the Wall anyway, at some point...

The Umbers (And Perhaps Other Families) Turn On Ramsay

A version of this theory has been floating around on Reddit (courtesy of user Skyrekon) for about a month, prior to the Battle of the Bastards even coming to the forefront. When Smalljon Umber brought Rickon Stark back to Winterfell, turning him over to Ramsay for torture/execution/what-have-you, it represented the Umbers betraying the Starks, to whom they'd once sworn their allegiance. Skyrekon's theory suggests that the Umbers are playing a long con and are actually ensuring Rickon's survival by feigning an allegiance to the Boltons. If that's the case, it follows that the Umbers could potentially turn on Ramsay mid-battle, securing a victory for Jon's forces. Other families could potentially follow suit because Ramsay is honestly just the worst.