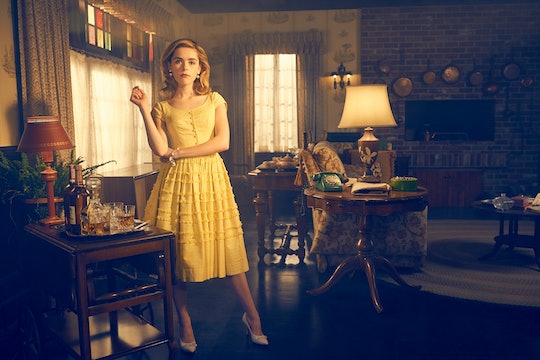 Feud: Bette and Joan is all about Hollywood ageism. There are other themes at play, of course, but that is the major one that the show addresses again and again. Stars Bette Davis and Joan Crawford dealt with being shut out left and right as they tried valiantly to hold onto the massive success they each had in their youth, watching as younger women took their opportunities. Every small victory was always undercut by the reminder that they were older and therefore Hollywood had no place for them anymore. Nothing made that clearer than B.D.'s speech to Bette Davis in Feud Episode 2, "The Other Woman."

B.D. is Davis' teenage daughter who accompanies her to set most days and makes huffy, exasperated expressions that actress Kiernan Shipka perfected during her days playing the daughter of another similarly difficult to get along with Betty on Mad Men. After Davis saw B.D. flirting with the crew on the set of What Ever Happened to Baby Jane?, she exploded, saying that B.D. was acting like a streetwalker. In response, B.D. delivered a speech that played on her mother's deepest insecurities in an effort to hurt her as much as possible. In it, she laid out clearly the dilemma that Davis faced as an aging woman in Hollywood in a sexist society — though B.D. was of the opinion that Davis should stop seeking attention because her days of being the star were done.

B.D. first brought up Davis' past complaints about stars like Norma Shearer, who Davis had wanted to step aside so that she, as a younger woman, could take the spotlight. B.D. said Shearer had dignity and Davis didn't; women like Shearer moved aside after their turn was done, but Davis was making a fool of herself by taking on a ridiculous role just to keep herself in the public eye. According to B.D., Davis was just jealous of her youth and that was why she was lashing out. Davis couldn't stand that nobody wanted to see her perform anymore.

The speech was rather on the nose, but nevertheless got the point across. Davis' fear was that she was going to come off as a jester instead of a respectable actress giving it all for the role, and that her desperation to hold onto her career would end up making a mockery of her. And it was clear that she was jealous of B.D., at least a little, but that was understandable. Just by virtue of her youth, B.D. would be able to get opportunities and attention that Davis couldn't anymore, despite her talent and reputation.

Women are always pitted against each other — particularly in the media — when they can't or won't fit into society-sanctioned categories. Feud is all about trying to survive those constant setbacks and judgements, even when those attitudes become ingrained in the very people who want to circumvent them. B.D.'s speech to Davis was harsh and it exposed a lot of uncomfortable feelings, but it highlighted just how much opposition Davis (and many other women) had to deal with on a daily basis, from all sides.