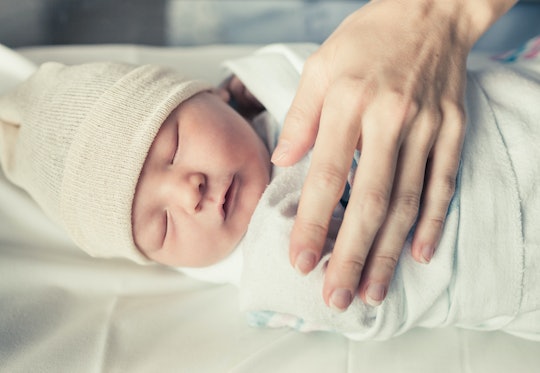 Be Honest: Newborns Are So Boring It Hurts

As my 80-year-old grandmother held my newborn daughter, her beloved great-granddaughter, for the first time, she reached out a gnarled finger and booped her on the nose. She found her reaction to be disappointing. "When's this baby going to open her eyes?" she complained. When I stopped laughing, I had to admit that while I loved my precious bundle of joy very much, my baby was a literal snooze-fest. It's not just her, though. If we're all being honest, newborns are so boring it hurts.

Most newborns, that is. I'm sure any parent with a baby in the NICU would give anything to hold a child others would describe as a "boring." So while we parents complain about babies born sans complications and their tendency to sleep rather frequently, it's also worth acknowledging that having a "boring" baby is, in so many ways, a blessing. And some babies are just high maintenance. My mom was in labor for 64 hours with my older sister, and it was a sign of things to come. My sister wouldn't nurse and had terrible colic. She and my grandparents took turns constantly walking and jiggling her and trying to mollify her with "Bohemian Rhapsody" and the Beatles. When I came around and all I did was eat and sleep, my mom took me to the pediatrician to find out what was wrong. The doctor assured her I was "the normal one."

So I guess what I'm saying is: boring is typical. After all the anticipation you feel during pregnancy, most newborns just aren't that exciting. Their daily schedule looks a little like this: eat, sleep, poop, repeat. They can't communicate (except through crying) or move (beyond flailing arms and legs or grasping your finger which is, admittedly, adorable). Assuming you have a healthy baby (and believe me, those of us who do are grateful, but we're not beyond a little complaining), the most dramatic thing that happens in those first few weeks is the when the umbilical cord stump falls off.

Life with a newborn can also be dull because, well, they're always asleep. You know, except when you want them to be.

I don't know about you, but taking forever to complete a basic task is tedious to me, and a newborn's approach to eating is to do it constantly. According to The Bump, a formula-fed newborn should consume about 2 ounces every 3-4 hours. Breastfed newborns need to feed every 2 to 3 hours. If you're nursing and have a little gourmand on your hands, you're going to need to settle in for the long haul. I know they need sufficient nutrition to grow big and strong, but I'm sorry — there aren't enough Ted Talks in the world to keep me interested while my infant breastfeeds for 45 minutes. Per side.

Life with a newborn can also be dull because, well, they're always asleep. You know, except when you want them to be. According to BabyCenter, the average newborn sleeps 16-17 hours a day. Unfortunately, it's not in one big chunk during the night. Oh no, my friends, for at least the first six to eight weeks, you're looking at frequent naps ranging from 2 to 4 hours at a time. It takes a long time for a new baby to differentiate between days and nights, which means you'll spend a lot of your waking hours staring into the face of your sleeping child. Or you could sleep when baby sleeps. *laughs hysterically*

The most stimulation you'll get is trying to avoid being peed on and examining the changing composition of your kid's poo. Enjoy.

Changing diapers is not my idea of fun either. You'd think it would break up the monotony a little, but you'd be wrong. That's because, according to the American Pregnancy Association (APA), newborns pee about 20 times a day. You read that right. You're looking at a diaper change every 2-3 hours. Once you get the hang of it, there's nothing much to it. The most stimulation you'll get is trying to avoid being peed on and examining the changing composition of your kid's poo. Enjoy.

The fact that newborns are basically lumps does not add to their interesting factor. You can put your newborn down in any number of containers, from an infant seat to a swing to a rocker, and pretty much guarantee they're not going anywhere. You can also strap them into a baby carrier and haul them around as you go about your daily tasks and they do... nothing. After birth, according to Healthy Children, babies' movements are almost entirely reflexive. They can't really do anything on purpose, and while they are little miracles, they can be a kind of a bummer.

The worst part of the whole "boring newborn" thing is that you don't know how good you have it.

Let's talk about newborn games, shall we? They're not exactly scintillating. You can sing, tickle, and make faces. You can give them objects to feel and show them different things. You can read simple books. Raising Children recommends tummy time starting with 1 to 2 minutes 2 to three times a day. I must have played "Eyes, Nose, Mouth, Kiss!" with my daughter a million times those first few months. The face-to-face interaction with you is essential to your baby's development, but can I help it if I can't wait until the kid can play a game of Monopoly?

The worst part of the whole "boring newborn" thing is that you don't know how good you have it. I remember my husband remarking, "When is she going to do something?" Well, now we have a 2.5-year-old and she's never not doing something. Newborns may be inert little pee and poop factories, but they don't hide your water bottle and laugh maniacally about it. So when it comes down to it, you really have to enjoy the boring. Because it certainly won't last forever.

More Like This
When It’s Safe To Bring Your Newborn To A Restaurant, According To A Pediatrician
Can You Burp A Baby Too Hard? A Pediatrician Shares Tips For Gassy Tummies
The Best Toys For 3-Month-Olds
Is It Good For Babies To Be Exposed To Germs? It’s Complicated