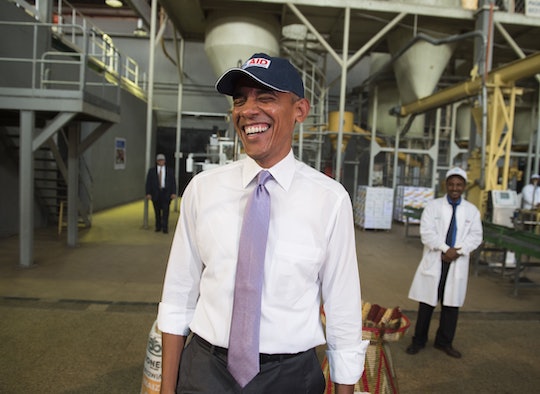 It’s been a few months since NBC released a short clip of President Barack Obama's appearance of Running Wild with Bear Grylls, when the president ate a bear's leftover salmon. But, finally, NBC aired the full episode starring Obama and Grylls on Thursday. While the intention behind Obama's appearance on Grylls' show was to bring attention to climate change, his light-hearted nature during the crazy survival experiment also made the strongest case for why he's the coolest president ever.

Here’s the thing: I know being “cool” is hardly a personality trait we need from our president. Our commander in chief needs insight and foresight, empathy and strength, a level head and open heart, but these are all traits Obama has. Who’s to say our President cannot exhibit all of these characteristics and more? Who’s to say the leader of the United States cannot be “cool?”

So what about POTUS’s appearance makes him cool? Well, not only did Obama eat a bear's leftovers, which is pretty awesome, but he brought the effects of global warming into our living rooms — in a public and entirely tangible way. Because until Grylls pointed out the receding Exit Glacier, which has lost 1.25 miles of its icy stretch since 1815 due to higher temperatures, did you realize just how much — and how quickly — our ice caps were melting. (Maybe, and maybe not.)

There are a few things President Obama wouldn’t, or couldn’t, do — like drink his own urine or take a selfie — but he still lived out in the wild with Grylls and was the first president ever to do such a thing. His daughters, Sasha and Malia may think he is a “little boring,” but that doesn’t mean Obama isn’t the coolest President ever. And the full episode of Running Wild with Bear Grylls proves it.

More Like This
The President Of Ireland Wants To Get Rid Of Homework & Honestly, He's Onto Something
Watch An Exclusive Sneak Peek At 'The Amazing Maurice'
'Bachelor' Alum Sarah Herron's Baby Boy Died Shortly After Being Born At 24 Weeks
Kate Middleton Is Not Expecting This Classic Valentine’s Day Gift From Prince William
What Parents Are Talking About — Delivered Straight To Your Inbox