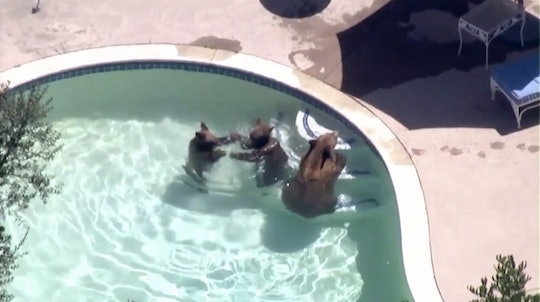 Bears Playing In A Pool Will Make Your Day Much Better

A momma and her two cubs took a playful romp in a Pasadena backyard this afternoon. Local news outlets got plenty of video of the bears playing in a pool and it's even more adorable than it sounds, mainly because I think we can all identify with momma bear, here, as she sits on the the pool steps, still and relaxed, sucking in the last few moments of summer. Her cubs tread water nearby, swimming and splashing each other, careful not to get mom wet. The Los Angeles Times reports that the bears even moseyed around a few other backyards and dipped into at least one other pool.

In addition to these aquatic escapades, the cubs hopped into a nearby dumpster, pawing around for snacks. They then suddenly scurried away as a small dog chased them over the fence and out of the yard, its white and brown spotted tail wagging.

Andrew Hughan, a spokesman for the state Department of Fish and Wildlife notes that "it’s not unusual at all to see bear activity" in this area this time of year, "but it’s unusual to have them in the pool." Hughan observed that the mother was around 300 pounds and that her "darn healthy" cubs were no more than 7 months old.

The bears haven't caused anyone any harm, but one of the cubs "accidentally bumped into the home’s rear sliding-glass door, shattering it." One of the neighborhood's residents Danny Brimecombe said that he'd seen the bears in his pool earlier that day, but managed to get them to leave. It wasn't long, though, until the bears were back, and splashing. This time, as he tried to get them to get a move on, "they were not afraid. I got them out of the yard, but they got separated and one was screaming and yelling for the other one and I got nervous. I didn’t know if the mother was around or if she’d left."

As of 1:50 p.m. PT, the bears were together, "safe," and in a tree. Authorities intend to wait until nightfall to get the bears back home. Sheriff's deputies were apparently on scene with the bears within an hour of their discovery.

Whereas I totally understand the need for a brief getaway, I hope that the bears get back to their home up in the mountains soon. Given this summer's southern California heat waves, who can really blame 'em? All of that fur's gotta be pretty hot.