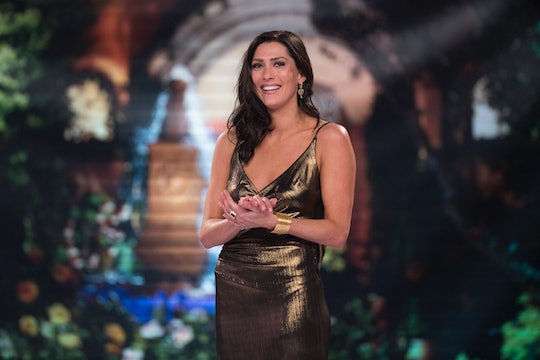 Becca Kufrin is happily engaged to Garrett Yrigoyen after her season of The Bachelorette, but, honestly, why wouldn't she show up on the franchise's end-of-summer mackfest? In Week 2, Becca Kufrin went to BiP just to shake things up. Her ex, Colton, had just rekindled his flame with Tia, who also happens to be in Paradise, but she has another suitor chasing her, too. Chris, also from Becca's season, took Tia on a date first, leaving her in a little bit of a love triangle.

Understandably, Chris was concerned that Colton might still be in love with Becca, since their season just ended. When Chris grilled him about it, Colton reacted pretty sheepishly, so it didn't seem like he was 100 percent over her. To be fair, Chris probably wasn't being wholly altruistic when he asked; he's obviously trying to win Tia's roses (and heart), so he isn't acting exclusively out of concern for her. But it's pretty clear to everyone — including Colton — that the dude has no idea what he wants.

Chris Harrison announced to the group that a "special guest" was coming on the show to speak only with the women, but the person who seemed to be sweating the appearance the most was definitely Colton.

For the uninitiated, Colton's saga with Tia and Becca went as follows: Becca and Tia were castmates and close friends on Arie's season of The Bachelor. Becca went on to become the Bachelorette, and one of the guys in her pool, Colton, admitted that he previously dated her friend, Tia. There was some speculation early on that he only applied to be on the show because he believed Tia would be The Bachelorette, but after arduous processing conversations between all parties involved, Tia gave Becca her blessing to date Colton, and Colton assured Becca that he was there for her.

The two had a strong connection and Colton made it all the way to hometowns, but sadly, that was the exact moment when Tia decided she still had feelings for him. She confessed to Becca that she hated the idea of them together. By that point, Becca was pretty deep into a relationship with him and the whole situation was a total mess. But Becca broke it off with him ahead of fantasy suites and that seemed to be the end of it.

Once Tia and Colton were in the mix together on BiP — and Colton knew Tia had been holding a torch all this time — they naturally started to reexamine their initial spark. But Colton also very much wanted to keep his options open while Tia was ready to jump into a relationship with him right away. In the end, they mutually decided to pursue other connections, but the season is still young, so anything could happen.

As soon as Becca appeared on the show, it was clear that Colton was not totally over her. He admitted to the other guys that when he and Becca broke up, he never got real closure. "Mentally I can't handle that. I won't be able to form a sentence," he said about a possible conversation with Becca. Anyone who's ever had an unexpected encounter with an ex can definitely identify with that feeling. Colton ended up breaking down into tears even before having a conversation with her.

Colton confessed to David that he had been hiding his feelings after his breakup with Becca. "I spent a month trying to get myself ready for this," he said. He admitted that as soon as he saw Becca, "it just took me back all the way." He said he wasn't sure if he could stay composed while talking to her. Finally, Colton said that he didn't think he was strong enough to stay in Paradise after all.