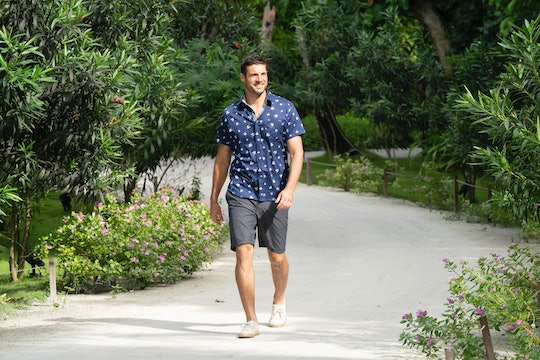 The Bachelorette's tense finale opened with Becca's family meeting each of her final two guys and it's safe to say that one of them was far, far more emotional about it than the other. Garrett cried in his sit-downs with both Becca's uncle and her sister Emily, which was incredibly sweet. But later, Becca's uncle called Garrett a "poet" on The Bachelorette and Twitter was a little confused about it.

Garrett's time with Becca's family was pretty teary and emotional, while Blake's seemed a lot more controlled. It was clear that Blake wanted to set Becca's family at ease with the idea of him as her potential life mate by being firm and steady in his convictions. Garrett's approach, meanwhile, was to convince them of how much he loved her by being totally vulnerable. Of course, his tears were moving and Becca's family was super appreciative of how open he was. But Uncle Chuck (not to be confused with Uncle Gary, the pastor who we met during hometowns last season) gave Garrett just a little too much credit for his tears.

"I think Garrett's just got a really beautiful soul," he opined during the family's post-game analysis with Becca after meeting both guys. "I think he's a poet. He's somebody who's just ready to sprout up and be something special. But at the same time, he's a little bit more of a risk, I think."

Emily echoed a concern that Garrett might not "challenge" Becca while she and Blake seemed a little more evenly matched, and Uncle Chuck agreed. He added, "You're gonna need somebody who's stride for stride with you, and feels the same passion for the issues that you feel for. I'm so glad I'm not you." Naturally, Twitter thought the idea of Garrett as a poet was hilarious, especially given that he spent the rest of the episode reaching for some really overwrought metaphors.

But the family's concerns about him were actually pretty common Bachelor franchise fare. Many finales arrive at a showdown where the star has to choose between being "the lover" or "the beloved" and Garrett definitely rendered Becca the beloved. Conversely, she and Blake seem to have a little bit more of a shared power dynamic, which is more in line with her expressed wishes to have a 50-50 partner. But after the heartbreak of Arie, a totally destabilizing relationship which left Becca feeling "blindsided," it makes sense that she'd want to choose a safe partner whose feelings for her she'd never have to doubt. And that's exactly what she did.

It was gut-wrenching to watch, but Blake, who both Becca and her family called her perfect match, ended up going home alone at the end of the episode. Ultimately, Becca chose Garrett, who she repeated again and again was "the better fit" while Blake had "always been so solid." During their joint interview in front of a live studio audience, Becca revealed that Blake was a little too "in his head" during trying moments, which led her to believe that Garrett might be a better match for her if and when they hit bumps in the road as a couple. Despite Chris Harrison teasing over and over again what an emotionally stunning finale it would be, Blake actually took the hit gracefully. As for Garrett, we probably have a lot more poetry to look forward to.