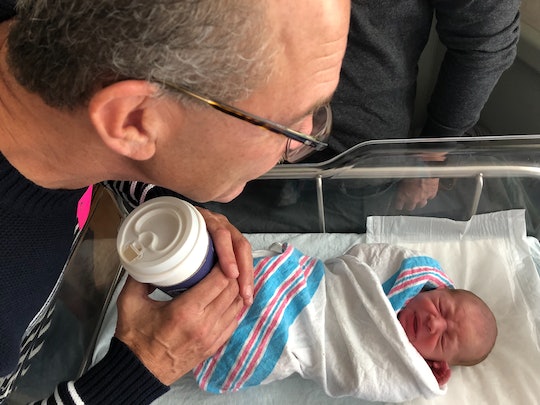 My dad isn’t cold. He’s just... serious. His brain works on overdrive 24/7, and one of his favorite phrases is “If you aren’t thinking, you’re dead.” He sleeps with headphones in listening to CSPAN, presumably so when he wakes up the next morning he’s learned about stock market movements via osmosis and is ready to hit the ground running for his job in wealth management. When he met my husband for the first time, he asked about his background. A private college education, CPA and job at a Big 4 accounting firm followed by a transition to investment banking seems to be what perfect sons-in-law are made of on paper. My dad’s thoughts? “Hmmm. Sounds like you made some wrong decisions at the wrong times.”

Does it sound like I’m complaining? I’m not. My dad is awesome. Growing up, even though he juggled four kids and an incredibly successful career, he attended every dance recital, picked us up from practices, showed up for Friday night football games and made a mean bacon and eggs on the weekends. Some of my favorite memories were spent riding home from dance class in the back seat with a friend, knowing that we had to be quiet because my dad was on a conference call. Listening to him discuss business, even though I had no idea what he was talking about, made me glow with pride.

But serious was serious. And becoming a grandfather changed everything.

When I told my parents we were expecting a baby, and that it was a boy, my dad immediately pictured his unborn grandson in a Harvard onesie, with an Ivy League education and life as the C.E.O. of a top bank ahead of him. He bought the baby a baseball bat and ball when I was 16 weeks pregnant. He was mentally skipping the entire infant and toddler stage and going straight to when his grandson could be his genius little sidekick. He also insisted on going by “Sir” as his grandpa moniker. In short, I could not picture my dad holding, cuddling or even really interacting with my son until he could hold his own in a discussion on the markets or have a spirited debate that would ultimately be “Googled” for accuracy.

He set his phone background to a photo of my son and kisses it goodnight each night.

The morning after my son was born, my parents showed up at the hospital to meet their first grandchild. My dad, coffee in hand as always, peered down and... a tear trickled down his cheek. Emotion! Then, my parents stood proudly holding my son for a photo and my dad... SMILED!

My dad has smiled for exactly four photos that I can remember, and I think three of them were accidental. Was it possible that this tiny 6-pound human could break down my dad’s tough exterior?

Eight months in, I can safely say that my son has turned my father into a soft, mushy, cooing version of himself that I have definitely never met. He calls him Mini Boss Man (MBM for short), because of course he is Boss Man (a replacement for Sir). They have matching t-shirts to prove it. The day we got home from the hospital, my dad held my son on his lap and quietly read aloud from the Wall Street Journal, his version of a bedtime story.

His new favorite hobby is writing captions for photos of his grandson, which he proudly shares in our family group chat at all hours of the day and night. He set his phone background to a photo of my son (he has had the generic Apple screensaver as long as he’s had an iPhone, so he improved his tech skills as well) and kisses it goodnight each night. He does bottles, spoon-feeds purees and carried the car seat six blocks to a restaurant when I forgot the stroller attachment just so MBM would have a comfortable place to sit. He makes a duck noise no one can replicate that my son finds hysterical. Over the holidays, he came into our room every 30 minutes to make sure the temperature was perfect and went to the store for a space heater when he deemed it too cold (new mom paranoia had me quickly unplug it once he went to bed, but I appreciated the gesture). He even went into my son’s room in the middle of the night and got him out of bed to hold him, simply because he missed him. OK, that one I freaked out about.

He’s still my know-it-all, sometimes exhausting, always serious father, but the big heart that he tries to downplay is now on full display. The next best thing after watching my husband become a father has been watching my father become a grandfather. A survey by the American Grandparents Association (aww) found that 72 percent of grandparents think being a grandparent is the single most important and satisfying thing in their life. Seriously — Google it.