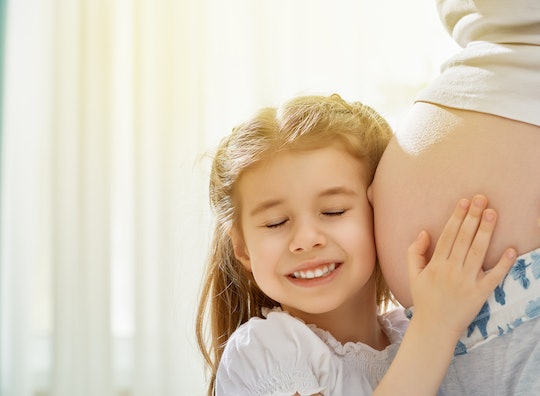 Becoming A Surrogate Meant Having "The Talk" With My 5-Year-Old... & It Was Kind Of Awesome

The evolution of my body from itty-bitty-titty-committee president to full-blown menstrual mayhem was about a four-year process. I sprouted A cups in the fourth grade, but I chugged through puberty awkwardly for a few more glorious years until I got my period. The inner workings of bodies and baby-making were never a mystery to me, thanks to my mother speaking honestly about it all (and, sure, thanks to a fifth-grade body video). I told myself I'd do the same for my kids when they reached a similar age. But my decision to become a gestational surrogate pushed "the talk" forward a few years. Think it's easy explaining the wonders of life to a 10-year-old? Uh, try a 5-year-old.

I've always been pretty open with my kids, and their baseline of knowledge included the tidbit, via my daughter Violet, 5, that babies grew in tummies. But in order to help my children understand that we were ~baking someone else's cupcake~, I had to talk to my daughters in detail about the female body long before I'd ever intended to. I had to find a way to teach them something about what makes us a family, or what makes a mom a mom — really get into how many eggs go into making a cupcake and all that.

Initially, I told my girls that a woman is only a mother when she makes the decision to love a baby as her own. I thought that was a nice way to wrap their minds around adoption and surrogacy all in one. Like, physically birthing a human isn't what makes you a mom.

But then my daughters asked why I'd chosen to love them as my own and not this baby. I realized we needed a quick age-appropriate lesson on where this baby came from.

I first told them that their dad and I had completed our family with Violet, our youngest, but that there was another woman we knew who wanted to be a mom, too.

Sunny, my oldest, asked why the woman didn't grow her own baby. So I told her that babies grow inside a uterus, and this lady didn't have her uterus anymore because she'd had cancer.

The girls told me I was like a mama duck sitting on a chicken egg, and that explanation satisfied them. I mean, it's not Gray's Anatomy-level accurate, but I thought it will do.

Violet piped up with her factoid that babies grow in tummies. So I explained that babies actually grow inside a little balloon inside the tummy called the uterus. Vocabulary lesson on point.

I went on to explain that babies hatch out of teeny tiny eggs much much smaller than chicken eggs, but they hatch inside the uterus. They both hatched from an egg my body made. But this baby would hatch from an egg another woman made. My uterus would just be the nest for the baby until she got big enough to live out of the nest and at home with her mother.

The girls told me I was like a mama duck sitting on a chicken egg, and that explanation satisfied them. I mean, it's not Gray's Anatomy-level accurate, but I thought it will do.

When they asked how daddy played into all this, I told them boys have a sort of key that unlocks the egg called a sperm. Daddy gave me a key to their eggs, and this baby's father gave the doctors his key to this egg. Pregnancy level up. Sexual conversations with toddlers avoided. Parenting level expert: unlocked.

As all important conversations should, the next chapter of our took place in the bathroom of a tiny burger joint down the road from our house.

That explanation was all they needed to understand that we were just babysitters for this little one. And I thought those little tidbits would hold them over for a few years until we approached puberty. But I was wrong.

As all important conversations should, the next chapter of ours took place in the bathroom of a tiny burger joint down the road from our house.

While waiting on our onion rings and fiesta burgers, I took the girls to the restroom for a quick potty break and wash up. As my youngest sat on the potty for no less than 20 minutes, my oldest pointed to a basket on the back of the toilet.

I looked in the basket full of tampons and pads, and I hesitated to open that can of worms when I knew there were people waiting for us to finish up. But since we'd already pre-gamed with the surrogacy uterus conversation I ran with it and told the girls that those were used by women on their periods.

They weren't sure what a period was. So I explained that the uterus we'd talked about makes a fluffy lining each month to catch any eggs that are hatching. But if no eggs hatch, the uterus will toss out that lining with the unhatched eggs and make a fresh one for the next month. It's like stripping the sheets on your bed, but menstruation probably happens more frequently than laundry at my house (I'm doing my best, guys).

They asked where the pads came into play, so I told them that the lining rides through with some blood out of their "lady parts" and that it doesn't really hurt, nor will they die from it. Why I couldn't say vagina after I said uterus and sperm I have no idea. But "lady parts" was what came out. Sunny piped up and said she'd seen Violet's birth video and babies come out of your lady parts with lots of blood too, but that looked like it hurt. I confirmed that compared to childbirth, my periods were a beach vacation.

They shrugged like, "thanks for the info," and we went back out to grab ketchup for the onion rings.

I knew by telling my girls about the female body that they might share the information, but the subject isn't wrong or dirty, and menstruation is nothing anyone needs to be embarrassed about. The information I shared was very age appropriate, so if they did happen to share it with their friends I expected nothing but calls from parents thanking me for doing the Lord's work.

However, a few weeks later I got a call from my best friend. Our girls are in kindergarten together, and her daughter had come home with some interesting questions about the female anatomy.

After school, she proudly declared "Sunny told me where babies come from!" Her mother hesitantly asked what she had learned, and Krista said, "Well she said they come out of your lady parts!" Her mother confirmed that sounded correct, but Krista did have one question.

"I get how Ms. Crystal did it because her lady parts are so big, but yours are little. How did I fit in there?"

Her mother looked down and realized that to the eyes of her kindergartener, the distinguishing "parts" that separate ladies from gentlemen were the two chest lumps we call breasts. After she picked herself up off the floor, she explained that the lady parts her friend was referring to were further south.

At some point, our kids begin to ask questions of us that push our own understanding about to the limit — no matter your answer, it's always, why, though? Finding a way to put into words the formation of our family, and of someone else's, however crudely I managed to do it for a 5-year-old audience, was kind of cool. Speaking honestly to our kids isn't always a piece of cake, but if you need to tackle something complex, I recommend you head on down to your local burger joint.

More Like This
The Morning Rush Is Parenting At Its Most Essential
Sex And Mom Guilt: When I Date Someone New, Am I Cheating On My Kids?
18 Fun Mother & Son Halloween Costume Ideas
24 Amazing Harry Potter Costumes For Fans Of All Ages