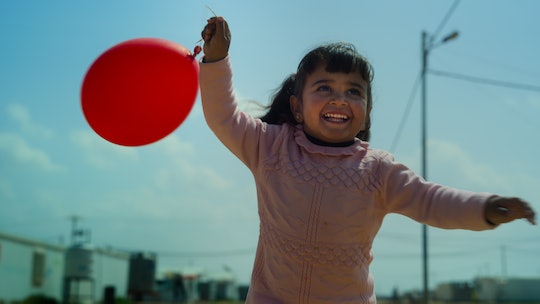 This New Docuseries Takes Us Around The World To Explore The First 2,000 Days Of Life

While the first few years of life aren't ones we tend to remember in great detail as adults, research has increasingly highlighted how vital this time is. But just how much do our early years shape our life? Becoming You, an upcoming AppleTV+ docuseries, will follow some 100 children from around the globe to learn how their first 2,000 days on Earth shape not only their development, but who they become.

Academy-Award-winning actress Olivia Colman narrates the series, which introduces viewers to children born all over the world, as they learn to talk, walk, think, and love within the first five years of their life. While the lives these children lead may be vastly different, Becoming You ultimately underscores the shared humanity of raising children.

Why The First 5 Years?

According to the Children's Institute, research has shown that the first eight years of life are when the most intense cognitive, social, and emotional growth happen. But the brain develops fastest in the first three years of life as children soak up and respond to the world around them. In fact, by the time a child reaches the age of 3, their brain is already 80% developed. By age 5, their brain is 90% developed, according to First Things First.

As a result, the experiences, attention, and nurturing a child experiences within those first five years lays the foundation for future learning, including language, literacy, reasoning, emotional, and social skills. Similarly, the First Five Years Fund has noted that when babies are exposed to prolonged adversity and stress in the first five years of life, they're more likely to develop life-long learning, behavior, physical, and mental health problems.

The Trailer Is A Tear-Jerker

Apple dropped the official trailer for their upcoming six-part docuseries Oct. 26, giving viewers a glimpse at some of the 100 children Becoming You will follow. "There are days in every child's life that change who they are forever," Colman teased in the trailer. "This is the extraordinary story of how we learn to talk, think, and love. From the moment we're born to when we turn five. The first 2,000 days of life, told through the eyes of 100 children around the world. One story, all about us."

Yes, The Olivia Colman Is The Narrator

If you caught the third season of Netflix's The Crown, the 2018 film The Favorite, or any of the handful of episodes of Fleabag that feature Fleabag's godmother, well, than you've seen Colman in action. Over the course of her decades-long career, Colman has won an Academy Award for Best Performance by an Actress in a Leading Role, three Golden Globe awards, multiple BAFTA Awards, and a long list of additional awards.

Becoming You Premieres In November

The first six episodes of Becoming You will debut globally Nov. 13 only on AppleTV+.