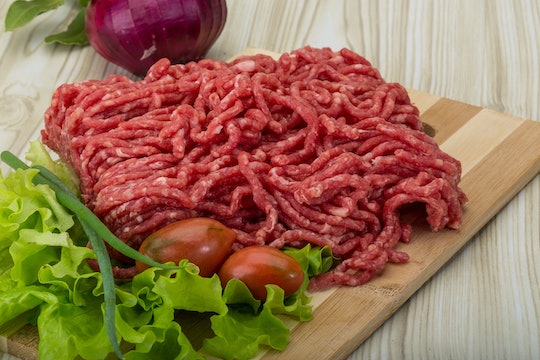 More Than 24,000 Pounds Of Raw Beef Have Been Deemed "Unsafe For Human Consumption"

It might be wise to rethink tonight's dinner menu because the United States Department of Agriculture (USDA) announced a huge beef recall Saturday that affects over 24,000 pounds meat. The recalled beef has been deemed "unsafe for human consumption," an advisory that has some parents understandably worried. And if you're concerned about this recall, here's how to find out if you have any of the tainted meat in your refrigerator.

Approximately 24,428 pounds (or 12.2 tons) of raw beef from American Beef Packers in Chino, CA, were recalled by the U.S. Department of Agriculture’s Food Safety and Inspection Service, according to a statement from the USDA. The beef in question was released and processed before the appropriate testing could be performed by the USDA, therefore rendering it unfit for human consumption.

Products included in the recall bear the establishment number “EST. 34741” inside the USDA mark of inspection and were distributed in California and Oregon, according to The Oregonian. And the recall is classified as a Class II recall, meaning this is "a situation in which use of or exposure to a violative product may cause temporary or medically reversible adverse health consequences or where the probability of serious adverse health consequences is remote," according to the Food and Drug Administration (FDA).

In a statement to Romper via email about the recall, American Beef Packers' rep, Kari Godbey Houchens, says: "The test was a general diagnostic test to detect any condition that would require disposal of the carcass. American Beef Packers was informed by USDA that a condition had been detected, which triggered the Class II recall. USDA defines a Class II recall as one involving a potential health hazard situation in which there is a remote probability of adverse health consequences from eating the food. This recall is considered low risk."

The raw beef items were produced and packaged on Aug. 21 and include the following identifiers, according to The Food Safety Network:

So far, there have been no reports of adverse reactions related to the recalled beef. Anyone who might be concerned about health related actions are urged to contact their physicians immediately, according to CBS News. Consumers are advised to throw out the meat or return it to point of purchase for a full refund.

This recall serves as an important reminder that beef, poultry, and fish are among the top items that can cause food poisoning if handled incorrectly, according to The Johns Hopkins Medical Center. Meat recalls are unfortunately common because they can easily become infected with bacteria or viruses, such as listeria or salmonella.

That all being said, be sure to check both your refrigerator and freezer for the recalled meat. And when in doubt, throw it out because tossing a few dollars worth of food is worth keeping everyone in the household healthy.