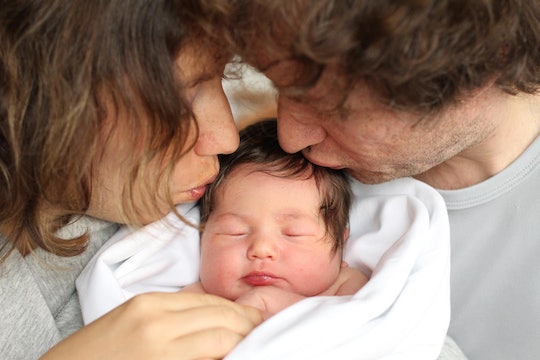 Before Baby, Our Marriage Was Great... & Then It Wasn't

My relationship with my husband was perfect (yes, I'm biased) until we had our first child. We were living comfortably in our Chicago condo with our long-haired black cat, Mr. Trevor. He made me laugh (the husband, not the cat), we went out for long, luxurious dinners, and we whimsically discussed our hypothetical child-to-be (who probably would get his big rock-star hair, my organization skills and our height — or lack thereof). Pre-baby, our marriage was great… after, not so much.

It was all fun and games until our hypothetical child became our actual baby, bursting out of me six days late (so much for her organizational skills), tiny (we were right!) and with a huge head of rock-star hair. With that bundle of joy came a whole lot of tears. From everyone.

I had never been around a baby in my life. In fact, I had envisioned a sweet little dumpling sleeping next to my desk in her lacy bassinet, cooing if she wanted to nurse. I’d take a quick break from writing to satisfy my little snowflake before I’d lay her back to sleep so I could continue working.

Turns out, my baby predictions weren’t quite accurate.

My baby girl cried all. The. time. She didn’t like to sleep, taking 20-minute naps throughout the night for the first year in between spurts of crying. My husband, who had a full-time job, returned to work briskly while I stayed home to care for the baby, my freelance career put on hold indefinitely.

10 years later, I still shudder when I remember how difficult it all was.

I became angry, resentful. When he came home, I shoved our sniffling, whimpering child at him and stomped to our room. Once, he had the nerve to tell me that he was tired. I slammed the dresser so hard, it moved. He was tired? He had just taken an eight-hour “vacation” at work, while I was home with this crying alien, and I hadn’t showered in three days, let alone see anything outside of our apartment, and he was tired? I would give anything to work for a day sans baby. He had no right to complain.

You could see how our marriage was going. It wasn’t fun. There was resentment on both sides. There was anger. We weren’t enjoying ourselves, each other, the baby, or this moment. In fact, now, 10 years later, I still shudder when I remember how difficult it all was. Every day seemed to be a little worse.

He didn’t put his dishes in the dishwasher? It was the least he could do to help!

I demanded that he put the diaper on our baby after her 3 a.m. feeding, but he would explain that he had to work in a few hours, while I could sleep in. Sleep in? Was that what he thought I did all day?

We were reaching disastrous levels of conflict in our relationship. Then one day, when she was about 2, my husband had a revelation: we should be on the same team.

I didn’t believe him or even want to join his team at first. It wasn’t until he started thanking me for everything I was doing, until he took my side even when I knew he didn’t quite agree with me, that I started to see it, too. He started bringing me coffee when he knew I was tired, started sending me cute emails telling me how much he appreciated me. I liked this team!

Slowly, I acquiesced. Yes, it helped that our daughter was now sleeping more, but she was also into the “terrible twos.” My husband and I realized that in order for us to make it as a family, we had to remember why we chose to become a family. We wanted this. We wanted to be a team. We actually loved each other.

So now, when she wakes up in the middle of the night and wants a glass of water, we check to see who looks more tired. Honestly. And that’s how we figure out who has to get up to get her water. It really is that simple.

Having a child is nothing like I imagined (pro tip: hang out with children before having them). But my marriage is fixed. For better.