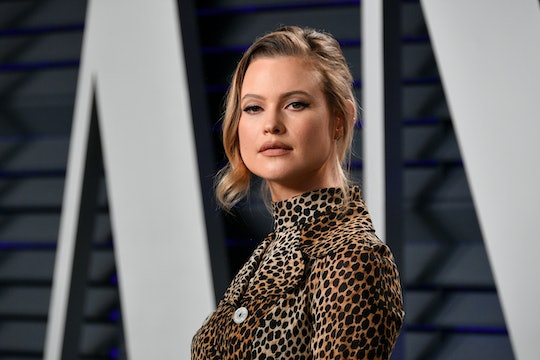 Having a baby changes everything — from your eating and sleeping habits, to your daily routine, to your overall priorities in life. And suddenly being responsible for caring for a tiny human, well, it takes some time to get used to. Add this huge shock to the system to hormonal fluctuations and sleep deprivation, and it's no wonder new parents often experience the "baby blues." However, sometimes there can be much more going on — such as postpartum depression and/or anxiety. Now, Behati Prinsloo opening up about PPD shows family support is so important.

In case you've lost track, the Victoria's Secret model shares two daughters with husband Adam Levine: Dusty, 2, and Gio, 1. And as E! Online reported, the mom of two had a rough time after welcoming their first child. "I had moments of postpartum [depression] that I felt like it was coming through, but my husband was so incredibly supportive and always got me out of it," she told Today. "I think it's very normal, though, as a young mom and a new mom to feel helpless and to feel over emotional, you know. I think I got lucky not to have it to an extreme case, but you can see yourself spiraling."

I think that the message is just that it's never too little to get help or to ask for help. So, no matter how small your feelings and stress — or whatever it is about being a new mom — there's always help out there and support from family and friends and I think nobody judges anyone.

As Prinsloo had previously told the online magazine PorterEdit, the experience following her second child was actually quite different. "After my first baby, I had a little postpartum depression and it was difficult to get back into normal life," she said. "But after the second one everything felt so much easier; it was easier for me to workout, breastfeeding was easier." (Further proof that every pregnancy/delivery/recovery is different!)

It's worth noting Prinsloo isn't the only model to open up about postpartum depression. In an essay for Glamour in 2017, Chrissy Teigen shared for the first time her experience with PPD.

"I had everything I needed to be happy. And yet, for much of the last year, I felt unhappy," Teigen wrote. "What basically everyone around me— but me — knew up until December was this: I have postpartum depression. How can I feel this way when everything is so great? I’ve had a hard time coming to terms with that, and I hesitated to even talk about this, as everything becomes such a 'thing.'"

According to the American Psychological Association (APA,) up to 1 in 7 women experience postpartum depression. So it makes sense to think that plenty of celebrities have suffered from it. Unfortunately, there's still a certain stigma attached to mental illness — especially following the birth of a child.

The thing is, society expects new moms to be in a state of pure bliss after welcoming a child, when more often than most people might think, it couldn't be further from the truth. Which is why it's so important when high-profile stars do talk about their struggle with postpartum depression. Kudos to Behati Prinsloo for her honesty — and for helping to raise further awareness for PPD.