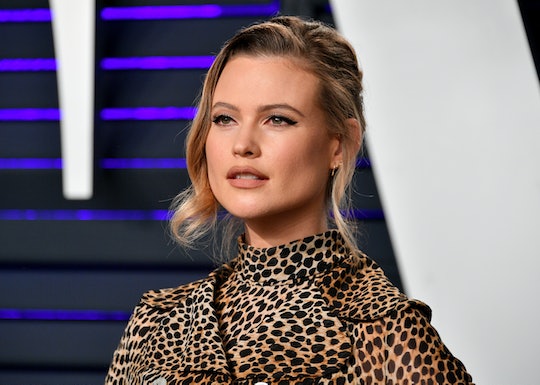 Whenever my toddler has the opportunity to sneak off with my phone it comes back to me with dozens of random photos — way-too-close-up selfies, shots of her feet, highly unflattering angles of me taking care of things/kids around the house. You name it. Everything but an aesthetically-pleasing, strategically-aimed photograph. Well, apparently one celebrity child actually has some talent behind the camera. Because Behati Prinsloo posted the cutest pic taken by her toddler daughter Dusty Rose.

As a refresher, the Victoria's Secret model and her husband Adam Levine share two children together: Daughters Dusty Rose, 2, and Gio Grace, 1. Prinsloo took to Instagram on Friday, Aug.23 to share a snapshot taken by her oldest child, People reported. "Photo credit - Dusty Levine," the proud mom captioned a shot of herself smiling broadly while playing with Gio.

Yet another follower commented, "Great shot! Giving everyone just a peek into your life without too much. Thank you."

In case you were wondering about that last comment, it was in reference to the fact that Prinsloo and Levine avoid posting close-up photos of their daughters or shots showing their girls' faces. And Gio's head is strategically cropped out of this photo. Unless of course, it was Dusty Rose accidentally chopping off her sister's head. Honestly, both are possibilities.

Although Prinsloo and Levine don't often share photos of their little girls on social media — or at least shots that show their face — the mom of two posted an adorable full-body photo including both Dusty and Gio earlier in August, according to Us Weekly. The mom of two included a sweet caption about motherhood, writing, "Here’s to the sleepless nights, bleeding nipples, crying, laughing, the highest of highs and lowest of lows and everything in between, I won’t change a single thing, being mom to Dusty and Gio keeps me strong, motivated and empowered."

So sweet, right? And apparently, there could be plenty more cute Levine kids to come. During an appearance on The Ellen DeGeneres Show in May, Prinsloo opened up about how many children she and her husband would ultimately like to have, according to E! Online. The former Voice coach wants five, but Prinsloo isn't so sure.

"I thought I wanted five, but now I think three or four will be good," she told DeGeneres. When the talkshow host gave jokingly gave her a hard time about "backing up" that number, Prinsloo replied, "Just by one. Adam can't have everything. I'm carrying them." (And she makes an excellent point if you ask me.)

However many kiddos Behati Prinsloo and Adam Levine end up with, it's clear that they're having a blast as parents. I love, too, how Behati is able to share the occasional glimpse of her life as a mom without posting closeups of her daughters, or photos of the fronts of their faces. As frustrating as it might be for fans who want to see the entirety of the Levine girls' adorableness, it speaks volumes that for Prinsloo and Levine, protecting Dusty and Gio's privacy comes first.