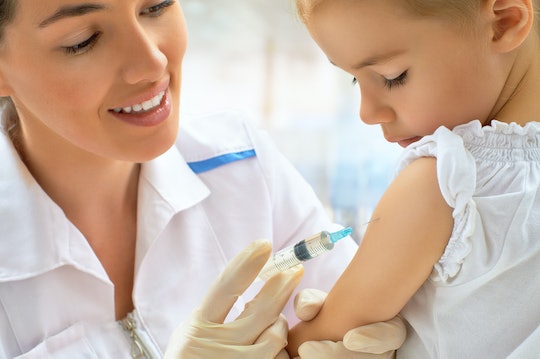 Education Won't Stop Anti-Vaxxers, Study Finds, But Here's What Could

Public health officials consider immunization crucial to a family's health and safety. Vaccines keep parents and children safe from preventable diseases, and help stop the spread of illnesses, such as the flu, that could turn into an epidemic or have deadly consequences if left untreated. Still, many parents are either hesitant or refuse to vaccinate their kids. State health departments often launch education campaigns to tackle the problem, but new research has shown that adjustments in behavior, not education, will change attitudes about vaccines. Here's what researchers mean by "behavior."

More Like This
Let’s Bust All The Myths About The COVID Vaccine & Fertility
The FDA Has Authorized The Pfizer Vaccine For Kids As Young As 12
Survey: Just 30% Of Parents Would Get Their Kids Vaccinated Against COVID-19 Right Away
Vaccinated People Can Ditch Masks. Where Does That Leave Kids?

A new study published Wednesday in the journal Psychological Science in the Public Interest found that most people avoid immunization for themselves or their kids because of perceived barriers, rather than personal beliefs or lack of knowledge, according to The Washington Post. As a result, the researchers discovered, education campaigns fail to be effective in boosting vaccination rates among parents. Using information-based tactics to appeal to the thoughts and feelings of a parent doesn't have the same effect as targeting behaviors themselves, the study found.

Instead, the researchers suggested, focusing on indirect behavior modifications, such as automatically scheduled immunization appointments, or sending text reminders when its vaccine time, would do more to get families to get vaccinated, The Washington Post reported.

Noel Brewer, the study's lead author, said, according to The Washington Post,

When it comes to vaccines, I think we have this optimistic belief that just by telling people facts, you can change their behavior. But when was the last time someone told you one fact and suddenly you lost five pounds or started brushing your teeth?

Brewer has a point: Most people won't start eating fruits and vegetables just because you told them they'll get a boost in vitamin D and other essential nutrients if they do. Previous research has found that modifications in behavior are far less influenced by trying to change personal beliefs and are more influenced by environmental changes, according to The New England Journal Of Medicine. Sure, using education may seem "logical," NEJM posited, but tons of research has shown that "educational efforts have a mixed track record — sometimes achieving desired effects, sometimes backfiring, and more often doing nothing at all," as NEJM pointed out.

Think of it this way, then, using the examples NEJM offered: You would put the bowl of fruit on the kitchen table and the candy in the cabinet, or you offer convenient days and hours when a person can go get the flu shot.

This is also not the first time researchers have found a link between behavioral changes and higher vaccination rates. A 2014 study published in Human Vaccines & Immunotherapeutics found that education campaigns weren't enough to increase vaccine uptake among health care workers in Florence, Italy. However, the research team explained that, for example, using the Health Belief Model helped providers identify behaviors and attitudes among health care workers that could be changed, and, thus, boost flu vaccine uptake.

The researchers wrote in their study:

Theories of behavior change not only help us describe and predict HCW vaccination behavior, but they also provide a framework to plan, guide, and evaluate our interventions.

Clearly, there's enough evidence to show that implementing psychological science is key to increasing vaccinations among parents and their children. Vaccinations have been proven time and again to be safe and effective, so, whether it's because of beliefs or perceived barriers, more needs to be done to encourage families to become immunized against preventable diseases. If education isn't working as effectively as public health officials believe, then it's time to reformulate the response.