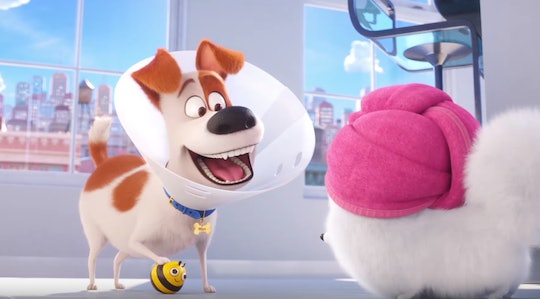 The Secret Life of Pets 2 may be animated, but the movie’s characters and performances are so charismatic, it's easy to forget they’re not real. Bringing these beloved pets to life involves a lot of ingenuity, and in this exclusive clip from Illumination, you'll get a behind-the-scenes look at the Secret Life of Pets 2 and see what it takes to create these magical moments.

The clip shows the film’s incredible voice cast in action, including comedians Eric Stonestreet, Patton Oswalt, Jenny Slate, Nick Kroll, Tiffany Haddish, Kevin Hart, and Dana Carvey. You also get an inside look at the movie making process, which starts off of rough black and white animations of basic storyboards. “In animation, the character’s performance is three parts,” editor Tiffany Hillkurtz explains in the clip. “It’s one part voice actor, and one part animator, and one part editor, because you do really choose the timing and how it sits with everybody else in the scene.”

The Secret Life of Pets 2 director, Chris Renaud, explains how the cast, animators, and editors come together to create the hilarious scenes you see in the movie. “I, working with the editor, will try to shape a performance with all the pieces we have, and when we record the actors a lot of things can happen," he says. “Of course, we have the scripted lines from our writer, and the actor brings something to it."

Renaud adds that Hart would often go rogue with his lines and give the producers plenty of improvisational material to work with. "Kevin [Hart] is a good example," he says in the clip. "He always adds like a little something at the end of each line to kind of make it his own. Later, we take all that great stuff and make something that works for us out of it.”

Hillkurtz notes that the process of creating a scene takes a lot of hard work, especially when the voice actors give such phenomenal performances. “It’s a lot of creativity and it’s a lot of responsibility to get that performance,” she says. “Because there’s some actors that every take is so great, that you’re like ‘I just don’t even know how to choose.’” After seeing Carvey, Hart, and Haddish seamlessly perform their lines in the clip, I can see how editors would have a hard time choosing the best takes.

The sequel picks up where the 2016 movie The Secret Life of Pets left off, and dives back into the lives of Max (Patton Oswalt) and his pet friends Gidget (Jenny Slate), Chloe (Lake Bell), Duke (Eric Stonestreet), Pops (Dana Carvey), Snowball (Kevin Hart), Buddy (Hannibal Buress), and Mel (Bobby Moynihan). But when the crew leaves the city and heads out for a trip to a farm, they meet a few new characters including a local sheepdog, Rooster (Harrison Ford) and an abusive circus owner, Sergei (Nick Kroll).

For those who haven’t seen the film, or for those who just can’t wait to rewatch it, there’s good news. The Secret Life of Pets 2 is available on Digital HD from Amazon Video and iTunes, and you can get the DVD and Blu-ray versions when they release on Aug. 27.