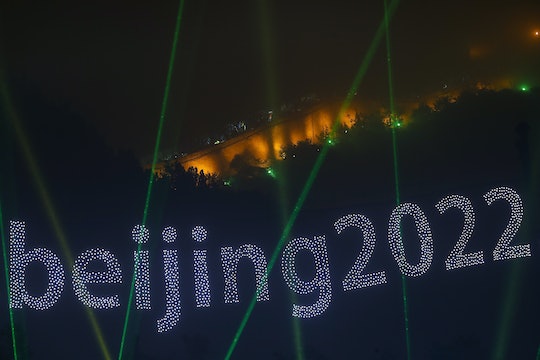 Watching the Olympics is about more than watching the best of the best athletes compete for the medals for their home nation (although that is a great part to it). It's also about dozens of cultures coming together to celebrate one another and celebrate the country hosting the Olympics. People will be hearing a lot about Tokyo, Japan and Beijing, China, when they host the next Summer Olympics and Winter Olympics in 2020 and 2022, respectively. But there is a good reason to celebrate one of those host countries, because the Beijing Winter Olympics may benefit pregnant women and their babies in a huge new way, according to a new report.

The next Winter Olympics will be held in Beijing in 2022. If you feel like this location is super familiar, you're not wrong. Beijing was also the host of the Summer Olympics in 2008. Just like the medals that stuck with the Olympic athletes that competed and won during the Olympics, something else from that Olympics is sticking with Beijing — the efforts made in 2008 to cut down on air pollution.

A new study, published in the journal, Environmental Health Perspectives, found that efforts to reduce pollution in Beijing during the 2008 Olympics were successful. Babies were born heavier during when the city had enacted the pollution regulations for the Olympics than any other time, according to Newsweek.

The best news is, Beijing is aiming to do the exact same thing again in the next four years, according to USA Today.

In 2015, when Beijing put out a bid for the Olympics, they promised that the air quality would be much improved by the time of the games, according to USA Today. "All in all we have the confidence, the capability, and the appropriate measures to constantly improve the air quality of Beijing," the vice president of the Olympic Bid Committee, Zhang Jiandong, said at the time.

With this confidence, they can very well raise the birth weight of babies born during the Olympics yet again, which is great news, especially for the thousands of people (not including the athletes), traveling to compete in the Olympics.

Researchers at the University of Rochester in New York were able to find that the environment had a major impact on the health of not only the mother, but her fetus as well. The lead study of the author, David Q. Rich, an epidemiologist at the University of Rochester Medical Center Departments of Public Health Sciences and Environmental Medicine said, according to a press release for the study:

The results of this study demonstrate a clear association between changes in air pollutant concentrates and birth weight. These findings not only illustrate one of the many significant health consequences of pollution, but also demonstrate that this phenomenon can be reversed.

How bad is the pollution in Beijing? Beijing is considered to be one of worst cities for pollution, according to the BBC, but conditions have recently improved, possibly due to better weather conditions. Still, anyone who is pregnant and headed to Beijing in the next four years should proceed with caution. Especially since, inhaling air pollution during pregnancy, according to March of Dimes, is the same as smoking during pregnancy — women are inhaling harmful chemicals like car exhaust, dust, fumes, and carbon monoxide. And no one wants their fetus inhaling that stuff due to the negative side effects associated with it, like low birth weight.

In 2008, according to the Guardian, Beijing was commended for their efforts in tackling air pollution, and Olympic athletes were also impressed with the conditions. Studies later found that the improved conditions not only raised the birth weight of babies at the time, but also boosted the heart health of residents, if only for a short time, according to CBS News.

If the same efforts are made in four years, residents and visitors of China can look to hopefully see the same results the next time the Winter Olympics rolls around.

More Like This
New Barney Docuseries Will Dive Into The Dark Side Of The Beloved '90s Kids' Show
You Can Stay At A ‘Hocus Pocus’ House On Airbnb — And It’s In Salem!
Every State’s Favorite Halloween Movie For Kids In 2022
What Parents Need To Know After DEA Issues Warning About "Rainbow Fentanyl"