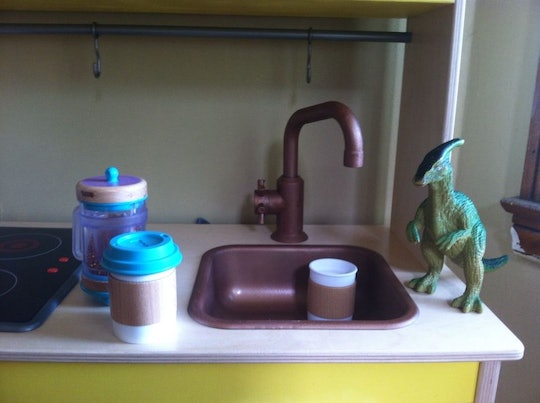 I was one of those new moms who had a really hard time making a baby registry. My family and friends had told me it was a good idea — after all, people needed to know what my wife and I actually wanted and needed for our baby— but I still found actually making a registry extremely challenging. Frankly, I just didn’t want that much stuff. I mean, how much could a tiny baby even need, anyway?

Before I had a kid, it felt like the culture of buying things for babies had gotten way out of hand. And after the baby came, for months we resisted the ever-encroaching wall of stuff that people wanted to give us. People wanted to get us presents. I told them not to worry about it. They gave us presents anyway. I quickly re-gifted them.

At first, I thought we did a pretty good job doing without a lot of things that many American parents consider “basics." For instance, we didn't have a baby swing, or a pack-n-play, or a wipes warmer, or any of those bouncy seats. We also only had one sippy cup, because we figured we’d have to keep washing it, no matter what.

Now that I actually have a kid though, these days, I’m part of the problem. Being a mom has absolutely turned me into a consumerist, and I don’t quite know what to do about it.

It’s hard to pinpoint exactly when I started down the slippery slope. I guess the first turning point was probably the high chair. The high chair we initially had a hand-me-down from a family member, and it seemed more than adequate until we actually started using it. It was too bulky for our small apartment, and it was too difficult to clean after our son smeared the entire thing with mashed potatoes.

When I complained about the high chair in a moms’ group, I was told in no uncertain terms that I should immediately purchase a more simple high chair from IKEA. At first, I was offended by the suggestion. I wasn’t the type of mom who had the money or the inclination to just go out and buy something new every time an item wasn’t perfect. Then I looked up the price. It was only twenty bucks. I was, in a word, sold.

I wasn’t the type of mom who had the money or the inclination to just go out and buy something new every time an item wasn’t perfect.

To avoid paying for shipping, I went to the nearest store with a friend. While there, I found about ten thousand other baby products that I suddenly felt I desperately needed.

These days, my kid is a toddler. And while he still has less stuff than many other children his own age, he's rapidly starting to accumulate a vast collection of books, toys and clothes. I’ve started to notice our other hippie parent friends raising their eyebrows when they see his overflowing toy basket in our living room. A seven-year-old neighbor kid who once visited our house even told my wife, “Wow, he has a lot of stuff for a baby!”

At this point, the issue isn’t even that we have too much kid stuff (which we almost certainly do). The issue is that I want more. I have transformed from a person who considered herself a staunch anti-materialist, into a mom who regularly drools over the next board book or developmentally appropriate toy I can buy for my child.

The issue isn’t even that we have too much kid stuff. The issue is that I want more.

The truth is, there's always going to be another board book that would be more enriching, more fun, and more exciting for my toddler. There is always going to be another developmentally appropriate toy. Intellectually, I know this, yet I still feel like I’m losing the battle against kid consumerism. In the process, I'm losing a big part of myself.

Before having a child, I thought I was above having consumerist tendencies. I thought that I couldn’t possibly fall into the trap of “wanting to give my kid everything," but apparently, I was wrong. I am not immune to the lure of adorable wooden play food or cute toddler cardigans.

What’s a mom to do? For now, I keep trying to remind myself that my family is on a budget, which curbs our spending somewhat. But if we ever find ourselves in better economic circumstances, I’m going to have a very hard time controlling my new consumerist impulses. In the meantime, I’m adding items to kid-related wish lists on various websites, while simultaneously grappling with how cluttered my life has suddenly become.