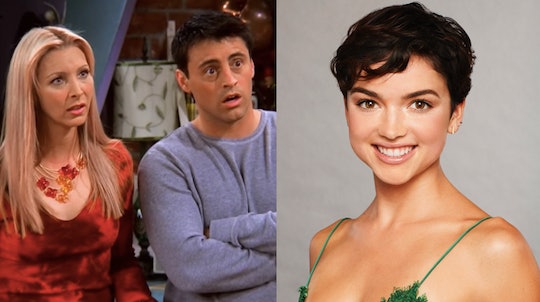 Bekah From 'The Bachelor' Looks Exactly Like This 'Friends' Character

Many Bachelor fans are in agreement that there's just something about Arie Luyendyk Jr. that resembles Ross Gellar from Friends. However, he's not the only Season 22 star with a Friends doppelgänger, believe it or not. Various people on Twitter think that Bekah from The Bachelor looks just like a Friends character and once I show it to you, you won't be able to unsee it. If you're a Friends obsessive (as so many of us are), you may remember a minor Season 3 character who worked at a Xerox store and was responsible for the destruction of Ross and Rachel's relationship. (Unless you think they were on a break.) Yep, I'm talking about Chloe.

One Twitter user posted that Bekah reminded her of the xerox girl from the show, and honestly the resemblance is kind of uncanny. Maybe it's the pixie cut. Maybe it's the rosy apple cheeks. Maybe it's the free spirit. Whatever it is, I'm not going to be able to watch her on the show without thinking about that Ross and Rachel breakup. "Bekah reminds me of the xerox girl from Friends. It’s like watching Ross Geller and Chloe together all over again irl," the tweet reads. I only wish one of the women competing for Arie's heart looked like Rachel so we could bring this thing full circle. Maybe Becca K.?

Hopefully Bekah doesn't resemble Chloe in some of her other, less savory aspects. Chloe apparently has no problem sleeping with committed or married men, and occasionally even steals from them. Not exactly Bachelor-friendly material. Luckily, from what I can tell right now, Bekah doesn't have a penchant for getting together with men already in relationships or stealing their things. So she's got that going for her.

Plenty of other people on Twitter also noticed the uncanny resemblance. Some even decided that this was a reason they'd decided not to root for her on the show. Considering how little the audience honestly gets to know any of these women, that seems like a solid enough reason for me, I guess?

Considering the fact that Arie looks just like Ross, perhaps we should take this as a sign that his relationship with Bekah is doomed? Will the show just follow the same plot as the sitcom version? Are we all in for yet another heartbreaking season in which Ross/Arie leaves the love of his life for one night with Chloe/Bekah? Don't do this to me, ABC.

Obviously, nobody (except Arie and the women on the show) know how this season is going to end. He does seem pretty serious about wanting to find true love, and he's said that being ready for marriage is a number one priority for him when choosing a winner of the show. So who knows, maybe Bekah isn't a real-life Chloe after all and she ends up being the one to steal his heart in the end. From the looks of things, the two of them are getting very close. There's no way anyone could miss those extremely steamy (too steamy) make-out sessions they're always having.

I just hope that I can stop mentally picturing Ross and Chloe when watching the show from here on out.