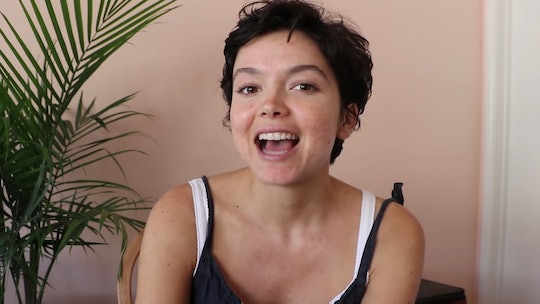 Every time April Fools' Day rolls around, there's always something that throws me for a loop. Whether it's Burger King advertising a chocolate Whopper, or Starbucks announcing new sizes in "micra" and "plenta." Some pranks so expertly toe the line between believable and utterly ridiculous, that people can't help but go, "Seriously?!" And if you ask me, Bekah Martinez's April Fools' Day joke involving baby Ruth is pretty much perfection.

On Monday, April 1, the former Bachelor star took to Instagram to share what appeared to be a sponsored post for a product called "Fit Baby Tea," according to InTouch Weekly. Along with a photo of her infant daughter, Ruth — who was born on Feb. 2, according to People — holding a cardboard travel cup of the tea, Martinez included a pretty convincing testimonial. "Hey guys, I’m SO excited to tell you about this new product that is really a game changer. I don’t know if you’ve noticed, but Ruthie’s gained a bit of weight since her birth and has been getting bloated from late-night feeds and milk cravings," she wrote. "Summer is right around the corner so you know it’s important that she slims up for those beach days ahead!. That’s why we’re putting her on a 30-day detox with @FitBabyTea."

Wait... What?! Slimming up a baby with a 30-day detox? Milk cravings? She can't be serious, right?

But wait — it gets even better. Here's where I started to get really upset:

Being a #fitbabyteapartner means putting your child’s appearance before their health ☺️ I’m sure we can all relate! If you’ve got a chunky baby or tubby toddler, you’ve gotta try out @FitBabyTea today.

Until I finally came to the last bit, that is. Martinez ended with: "Use my code APRILFOOLS20 for 20% off 😉."

In case you were wondering, the responses were equally as entertaining as the post itself. One Instagram user wrote, "For like 3 seconds I thought this was real and I was shook as hell oh god." (Same here.)

Another person hilariously took the satirical post and ran with it, writing, "Omg we used this with our son after he nearly DOUBLED his birth weight in just 6 months. Total game changer!"

Yet another person sarcastically added, "So glad you've got Ruthie onto this. I know children who DOUBLE in weight by 5 months and have tripled their weight after a year. Disgusting. Imagine gaining a stone in year. Chubby chunkers."

Still others apparently didn't read all the way to the end. One Instagram user ranted, "Are you kidding me?!?! Worried about how ur baby looks more then [sic] her health?? All baby’s are chubby until they start crawling or walking where they can burn it off!! U want a baby who will look good in a bikini?? This s why KIDS SHOULDNT BE HAVING BABIES!!!!"

Martinez kindly spelled out her intentions for one disgruntled commenter, writing, "The point of this post is to show how ridiculous all this fit tea b*llsh*t is. if you can’t see the humor in satire that’s your problem, not mine."

Until I made it all the way to the bottom of Martinez's post and saw the "discount code," I was honestly horrified. Which is exactly this prank is so perfect. By contrast, Arie Luyendyk Jr.'s April Fools' Day joke in 2018 was a total dud. (You know, the guy she tried to woo during her stint on The Bachelor?) As Us Weekly reported, Luyendyk Jr. received backlash after posting a fake pregnancy announcement on social media. Not cool. Not cool at all.

So kudos to Bekah Martinez for an on-point April Fools' Day joke. Because not only is it a freaking hilarious spoof on weight loss teas, it teaches a valuable lesson on actually reading something before commenting — something plenty of people clearly need to work on.