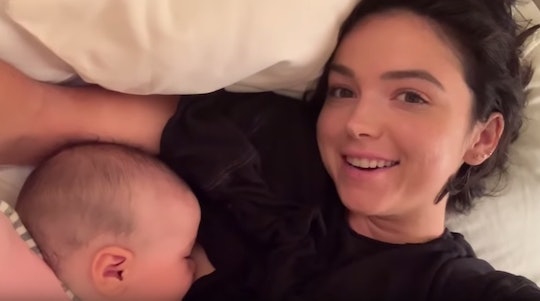 It might seem cliche, but nothing can truly prepare you for parenthood. Even if you helped take care of younger siblings or nieces, and even if you babysat all through college. Because once you're in charge of keeping a tiny human fed, clean, and alive 24/7, everything changes. Your sleep habits, daily routine, and priorities are a given — but parenthood changes you in other ways, too. Suddenly, your instinct is to catch the puke of another person in your hands. And are you even really a parent if you've never had to deal with poop leaking out of your little one's diaper? Because Bekah Martinez's photo of baby Ruth's epic diaper blowout is giving moms flashbacks.

As you might have heard, the former Bachelor star welcomed her first child — a daughter named Ruth — with her boyfriend Grayston Leonard on Feb. 2. Since then, Martinez has made it a point to keep it real when sharing her motherhood journey. And you can bet she isn't sugar-coating a gross, but all-to-common reality of parenthood: diaper blowouts.

On Wednesday, July 10, Martinez took to Instagram to share a photo of baby Ruth's recent diaper mishap. You might want to avert your eyes if you happen to have a weak stomach. Because this one is a doozy. "Parenting: not for the faint of heart or stomach," she captioned a photo of Ruth giving a little smile as poo is seemingly everywhere but contained inside her diaper.

As you can imagine, the comments section of Martinez's post was a gold mine of mom empathy and hilarity. Fellow mom and reality TV star Jamie Otis wrote, "If I’d never had a baby I wouldn’t believe someone so small could poo so much! Once my daughter squirted it clear across the room while I was changing her."

Another parent commented, "I can smell this picture," along with a nauseated emoji.

Yet another Instagram user wrote, "Oh girl. I’ve been there. I usually stand there for at least a minute just staring trying to figure out where to start."

Meanwhile, another follower chimed in with, "That breast milk poop is RUTHLESS."

A seasoned parent even offered up a tip about most baby bodysuits, writing, "The slits in the shoulders are made so you can pull the onsie down over her butt so she doesn’t get poo on her head!!"

Someone else accurately declared, "How to kill baby fever:."

Although the diaper blowout photo was a bit more graphic than her usual updates, Martinez has routinely shared some of the less "Instagram-worthy" moments of parenthood. Like the fact that it takes approximately 12 years to prepare to go anywhere with an infant. "We made it out of the house and it only took us three hours to get ready!!" she captioned a photo of herself next to a stroller in March.

Or that time when she confessed, "Sometimes having a baby sucks." When commenters attacked Martinez for being ungrateful for her healthy child, she was quick to defend herself, according to Mother.ly. "This isn't fair. I'm not saying having a healthy baby sucks. I'm saying parenting is hard sometimes," she replied. "It's not being ungrateful for a healthy child. It's being human and struggling and being transparent about that."

Personally, I'm loving Bekah Martinez's honest take on parenthood so far. If you browse most celeb-moms' Instagram accounts, it's the same beautifully edited images of happy moms and happy babies dressed in gorgeous outfits. Which isn't a bad thing, necessarily. But it's also not a realistic portrayal of motherhood, either. And I'll take a blowout photo over yet another perfectly coordinated mommy-and-me tea party any day.