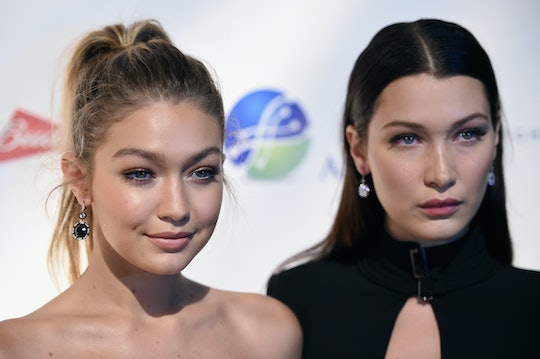 Say it aint so: Bella Hadid and The Weeknd have allegedly called it quits, according to E! News. Neither Hadid nor The Weeknd (real name: Abel Tesfaye) have commented on the status of their relationship, but according to sources close to the couple, their increasingly demanding schedules were the reason behind the split. It has been a pretty big year for both the 25-year-old Canadian musician and the 19-year-old model (and younger sister of also-crazy-in-demand Gigi Hadid), so it makes total sense that something would have to give, but honestly, the low-key couple did seem like a good match.

Bella Hadid and The Weeknd had been an item since spring 2015, although Hadid had been spotted at one of his concerts as early as 2013. They weren’t officially seen together until they were spotted at Coachella earlier this year, and then holding hands at New York Fashion Week, according to Bustle. When asked about Hadid during an interview with Rolling Stone in October, Tesfaye explained that his initial interest in her was strictly professional: “I actually asked her to be on the artwork for Beauty Behind the Madness. My motive was literally to work with her."

While we don’t know how long ago the two decided to split, they definitely spent the holidays apart, with Bella celebrating with her famous fam in Beverly Hills (with plenty of snaps from mom Yolanda Foster’s Instagram account to document the occasion!). And it definitely seems like the close-knit group was helping to keep her spirits up: on Saturday, Gigi posted a fun clip to Snapchat of herself and Bella dancing to the High School Musical soundtrack — complete with totally on-point choreography, of course.

The feel-good video is sure to be total nostalgia gold for a lot of their followers — Gigi and Bella would have only been 11 and 10 when the first movie was released, and they probably spent hours memorizing the song lyrics and dances like so many other girls their age. The clip — just like the majority of the other photos and videos the Hadid sister share on social media — is also yet another example of how close the two seem to be. And that is great news for Bella, because everyone knows the best way through a breakup is dancing like a fool with your bestie, right?