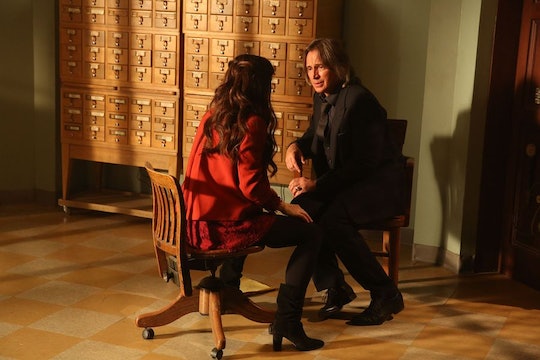 Belle Is Pregnant On 'Once Upon A Time,' But There's One Big Catch

Well, Rumple got some good news and bad news on Sunday's Once Upon a Time. After a less than ideal visit with Hades, Rumple learned that he was going to be a father, again. That's great, right? Wrong, because that baby technically belongs to Hades due to an old contract Rumple made to save Baelfire. The worst part of it is that Belle, who is pregnant on Once Upon a Time, doesn't even know that she's pregnant. So, before even learning about becoming a mother, she has already lost her son.

In a flashback when Baelfire was a child and Rumple and Milah were still together, we learn that Rumple made a deal with a healer in order to save Baelfire's life after being bitten by a deadly snake. Because Rumple didn't have the money to pay the healer at the time, he made a deal that gave the healer his second child. Milah was furious with the deal, as one would be, and seemingly ran into Hook's awaiting arms.

Milah and Rumple didn't have another child, which was Rumple's plan in getting around the deal, but I don't think he realized the deal transcended beyond his marriage with Milah. Rumple killed the healer who he made the deal with, but the healer transferred the document to Hades, who now holds the power. So, when Hades saw that Belle was pregnant, he instantly had the upper hand.

Hades certainly has plans for Rumple now that Belle is pregnant. Hades told Rumple that there's something he needs that only Rumple can do. What that is, I don't know, but I'm sure it is going to put a lot of stress on Rumple. Plus, this deal he now has with Hades is sure to put stress on Rumple's relationship with Belle, who, once again, doesn't even know she is pregnant with a child who is contractually promised to Hades.