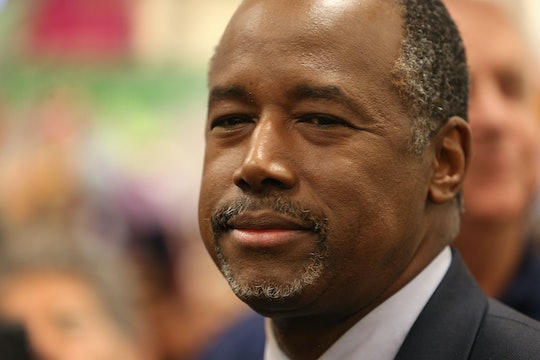 Ben Carson Admits To Lying About Scholarship, & It Isn't His First Big Lie

Front-runner in the race for the GOP presidential nomination Ben Carson admitted he lied about applying to West Point — let alone getting a full scholarship offer. Carson's confession today came after a West Point spokesperson said there is no record of Carson applying and that the academy does not offer full scholarships. Carson had repeated the story multiple times, including in two of his books, as a demonstration of his exemplary character. Can’t you taste the irony?

In his telling of events, Carson said he privately dined with Gen. William Westmoreland after a Memorial Day parade in 1969, when Carson was serving in his high school’s ROTC program. “I had dinner with him and the Congressional Medal winners,” Carson said in his book Gifted Hands. “Later I was offered a full scholarship to West Point.” In his January 2015 book, You Have A Brain, Carson stretched out the series of events by saying he met Gen. Westmoreland at one point, marched in the parade at another time and got the West Point scholarship offer at a later date. Cecil Murphey, who ghost-wrote Gifted Hands, told Politico today that Carson always seemed a bit hazy on the specifics. “My gut response is that it was not a private meeting but there were others there,” Murphey said. “The general took a liking to Ben and opened doors.”

In an interview with The New York Times today, Carson confirmed he couldn't remember the details about the West Point conversation. "I don’t remember all the specific details. Because I had done so extraordinarily well you know I was told that someone like me – they could get a scholarship to West Point. But I made it clear I was going to pursue a career in medicine,” he said. “It was, you know, an informal ‘with a record like yours we could easily get you a scholarship to West Point.'”

Before the Carson camp’s admission, West Point spokesperson Theresa Brinkerhoff told Politico the story was improbable. “In 1969, those who would have completed the entire process would have received their acceptance letters from the Army Adjutant General,” she said, explaining there are no records that Carson even applied. “If he chose to pursue (the application process) then we would have records indicating such.” She added that costs at West Point are covered, so Carson had no need for a scholarship. Other records show Gen. Westmoreland was not in Detroit during the Memorial Day parade, although it’s possible Carson met him during a large banquet dinner in February of that year.

Carson’s campaign manager Barry Bennett told Politico today that the presidential hopeful “can’t remember with specificity” his conversation with Gen. Westmoreland. “He believes it was at a banquet... Their brief conversation but it centered around Dr. Carson’s performance as ROTC City Executive Officer,” Bennett said. “He was introduced to folks from West Point by his ROTC Supervisors... They told him they could help him get an appointment based on his grades and performance in ROTC. He considered it but in the end did not seek admission.”

The news can’t possibly be good for Carson’s campaign, especially when taken alongside the other significant details from his life that have come under suspicion.

Carson’s Childhood Friends Say He Lied About His Violent Past

In Gifted Hands, Carson talked in detail — much greater detail than the West Point story — about his rough adolescence in Detroit. In one of the most poignant anecdotes, Carson said he nearly stabbed his best friend after the pal changed the radio channel.

In that instant blind anger – pathological anger – took possession of me. Grabbing the camping knife I carried in my back pocket, I snapped it open and lunged for the boy who had been my friend. With all the power of my young muscles, I thrust the knife toward his belly. The knife hit his big, heavy ROTC buckle with such force that the blade snapped and dropped to the ground.

Carson said the incident caused him to reevaluate his life and put him on the right track; the track that he claimed in the same narrative earned him that full scholarship offer to West Point. However, in a new report, CNN could not find anyone from Carson’s past who was willing or able to confirm his street-life stories. Carson fired back the the CNN story by saying he changed the names of the people referenced in his book to protect their privacies and said other friends may not have known how bad his temper really was. “So unless you were the victim of that temper, why would you know?” he said this week. “Just because you happened to know me? That doesn't make any sense.”

In the most recent GOP debate, Carson flat-out said he “didn’t have an involvement” with Mannatech, a company that was successfully sued for deceptively claiming their products could cure cancer and autism. But even conservative publication The National Review called that a “bald-faced lie.” As they point out, Carson was paid for his speeches, appeared in company videos and was even prominently featured on the website. In one of those speeches, Carson said using Mannatech’s supplements made his symptoms of prostate cancer go away within three weeks. He added, “I was really quite amazed.”

Taken alone, each of those stretches of the truth could be dismissible. But it seems a track record is emerging — and it isn’t the type you’d want the president of the United States to have.

More Like This
Michigan Right-Wing Group Wants To Erase LGBTQ+ Sex Ed
Meghan Trainor Shares Baby News After Dropping Hints On TikTok
13 Is "Too Early" For Kids To Be On Social Media, Surgeon General Cautions
Adam Levine & Behati Prinsloo Welcome Their Third Baby & This Is Where It Gets Real
What Parents Are Talking About — Delivered Straight To Your Inbox