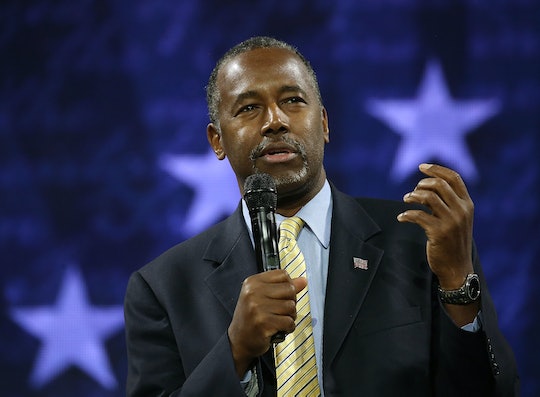 Ben Carson Answered The Baby Hitler Question Finally, So We Can All Relax Now — VIDEO

We’re only months away from the first primary votes and Republican candidates have finally gotten around to talking about the important stuff: the economy, climate change, and now hypothetical time travel scenarios that involve killing baby Adolf Hitler. Republican presidential candidate and retired neurosurgeon Ben Carson finally answered the Baby Hitler question this week. No, Ben Carson would definitely not travel back in time to abort Baby Hitler. I don’t know about you, but I certainly feel better now.

The New York Times Magazine started all of this madness last month when it polled its readers to ask “If you could go back in time and kill Hitler as a baby, would you do it?” It turned out more NYTM readers than you might expect were in favor of using time travel technology to kill baby Hitler: Nearly half of NYTM readers said they would definitely murder baby Hitler if given the chance and almost a third of readers weren’t sure what they’d do with such an opportunity. The question kicked off a storm of debates online and several think pieces on the underlying ethical concerns killing the infant Hitler might raise and a few on the time travel paradoxes killing Hitler would be guaranteed to introduce.

But Ben Carson was given a slightly different scenario. During a post-debate gaggle with reporters Tuesday night, an SBNation reporter asked Carson if he’d be in favor of aborting baby Hitler. The reporter framed the question as a way of exploring the candidate’s recent comments on how the Holocaust could have been avoided and general anti-abortion stance. In response, Carson gave a simple, straightforward answer, though he did look a bit annoyed at the question. “I’m not in favor of aborting anybody,” Carson told SBNation.

Carson isn’t the first to offer his thoughts on time travel, infanticide, and the Holocaust in recent days. Earlier this week, former Florida governor Jeb Bush stunned us all when he said “Hell yeah” he’d murder an infant Adolf Hitler, even if it meant setting off a mess of other consequences or some weird alternate reality. Said Bush, “You gotta step up, man” even if it means, you know, murdering an innocent baby in his crib.

I’m just waiting for this to become a question posed to all the GOP contenders in the next Republican primary debates.