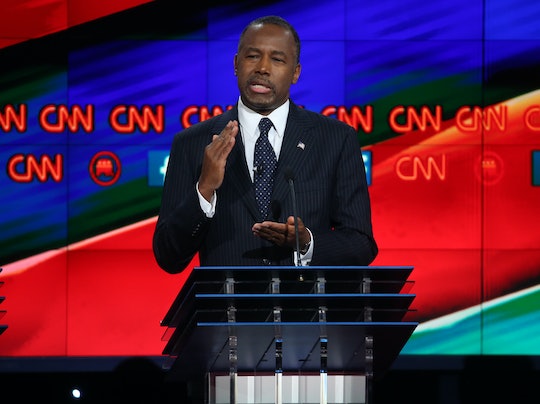 In his opening statement during tonight's GOP debate, Ben Carson called for a moment of silence for the victims of the San Bernardino shooting. Heartfelt moment of reflection on a national tragedy? Cheap ploy to exploit the fear and grief of anxious voters? Twitter had some thoughts.

Personally, I don't think this was the most terribly crass tack to take in terms of an opening, but I also think it was absolutely capitalizing on a tragedy to make people think Dr. Carson was being classy. In terms of branding, it re-asserted his persona as being humble, religious, and soft-spoken.

But including a moment of silence strikes me as sort of a lose-lose situation. Take a meaningful moment of silence, say five seconds, and you lose valuable airtime. Give it less time, as Carson seemed to, and it comes across as insufficient and insincere. And it's hard to bounce into self-aggrandizement after something like that, which is what the candidates are expected to do in their intros. Granted, that's my take as someone who, compared to the guys on stage tonight, looks like a communist hippie, but still. I absolutely wasn't alone in my negative assessment. Twitter had some fun at the doc's expense. Let's take a look.