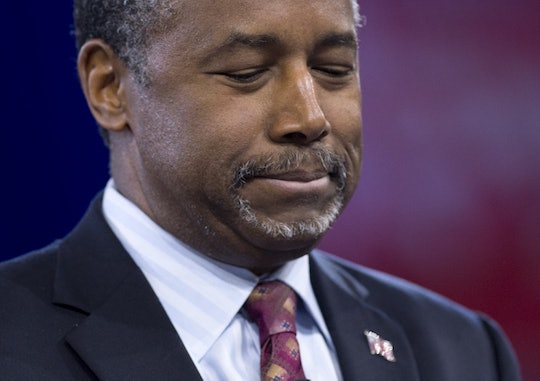 Ben Carson Drops Out After Not Attending Republican Debate

After an announcement about his campaign on Tuesday night many speculated that it would only be a matter of time before Dr. Ben Carson dropped out of the race for the Republican primary election. Carson has been pulling a low number of votes in each state election and the votes were not enough to compete with GOP front runners, Donald Trump and Texas Sen. Ted Cruz. On Thursday, at the GOP debate in Michigan, Carson was noticeably absent from the stage. On Friday, Carson dropped out after not attending the Republican debate.

This announcement comes after Carson's announcement to the public on Tuesday. In the announcement, Carson stated that he would not be attending the GOP debate in his hometown of Detroit, Mich. and also made some comments on the state of his campaign.

"I do not see a political path forward in light of last evening's Super Tuesday primary results," Carson said.

Carson did not formally drop out of the race with that statement, but due to its negative tone and nature, it gave plenty of people a fair warning that the candidate was not far behind from dropping out of the race. Given his record in the primary election, it was only due time.

In a speech at the Conservative Political Action Conference taking place outside of Washington, D.C., Carson spoke of voter turnout in the recent primary elections:

"There's a lot of people who love me, they just won't vote for me."

Super Tuesday wasn't so super for Carson. Results from Tuesday consistently put Carson in last place in each state, and it did not look like there was much of a future ahead for him. Carson was consistently polling last compared to other candidates and his delegate count wasn't much better.

Before he dropped out of the race, Carson had eight total delegates compared to current poll leader Donald Trump's 329 delegates.

Florida Sen. Marco Rubio and Republican primary candidate had these nice words to say about Carson dropping out of the race:

After announcing the suspension of his campaign at the Conservative Political Action Conference, Carson announced that he will joining My Faith Votes, an organization that inspires Christians to vote in elections, in an effort to bring more evangelical voters to the polls.

Carson dropping out of the race means that things are heating up in the primary election as more and more states begin to vote. This means your vote is now more important than ever.