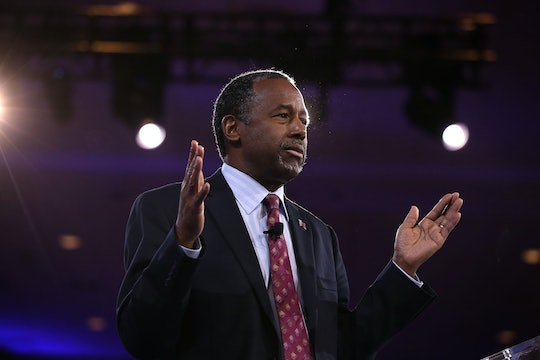 Oh Ben Carson, how I've missed thee. The primary election has been quite dull without Carson's commentary and all around general presence on the debate circuit of late. Ben Carson is not afraid of voicing his opinion, no matter how different or unique it may be (call him Donald Trump Lite, perhaps). After the U.S. Treasury announced Wednesday that Harriet Tubman will be the new face of the $20 bill, for example, Ben Carson said Harriet Tubman belongs on the $2 bill instead. Why? Because Ben Carson, of course.

On Wednesday, U.S. Treasury Secretary Jack Lew announced that Harriet Tubman would be replacing Andrew Jackson on the $20 bill. Jackson will move to the back of the bill and Tubman will replace him on the front, as the currency's main figure. Initially, there was speculation that Tubman would replace Alexander Hamilton, Founding Father and first Secretary of the Treasury, but concern over removing Hamilton from U.S. currency completely stirred up enough controversy that the decision was stayed — until this week, when the Treasury announced Tubman's new spot.

Carson, however seemed to disagree with that statement. According to CNN, Carson told Fox Business Network,

I love Harriet Tubman. I love what she did, but we can find another way to honor her. Maybe a $2 bill.

So what is the problem here? The problem is that there are only so many $2 bills in circulation and not enough $2 bills to properly give Tubman the credit she deserves.

According to marketplace.org, there are roughly 1.2 billion $2 bills in circulation and they are still being printed. While that may seem like a lot, there is approximately $1.2 trillion in bills and coins currently in circulation in the United States right now and that makes .001% of them $2 bills.

While $2 bills are still being used to this day, these numbers make them pretty hard to show up in your wallet during your weekly trip to Trader Joes. And while putting Tubman on the $2 bill could be a solution, if a woman is going to be on U.S. paper currency for the first time in more than 100 years, I want it to be a bill I can see every day.

"Andrew Jackson...was a tremendous president," Carson said in his appearance on Fox Business Network. "I mean, Andrew Jackson was the last president who actually balanced the federal budget, where we had no national debt."

While Carson has a point, I don't see the U.S.Treasury changing their minds any time soon after making their announcement, especially given how controversial Jackson was to so many. If nothing else, at least Carson can rejoice in the fact that President Jackson will still be on the back of the $20 bill.