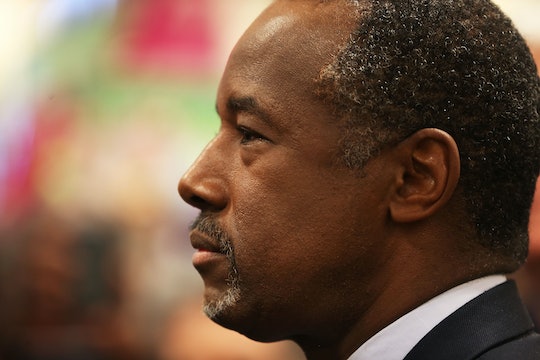 Ben Carson Says Trans People Make Others "Uncomfortable," & His Comments Are Just One More Reason Why He Shouldn't Be Our Next Prez

The lead contender for the Republican presidential nomination is letting his prejudice show: in a new interview with Fusion Thursday, Ben Carson said trans people make others “uncomfortable.” Aside from that being downright offensive, the comment is also beyond frightening when you consider he could be the next leader of the United States, in less than one year. Sadly, it’s just another item on the ever-growing list of reasons why Carson is proving himself unfit not only to sit in the Oval, but also to represent American values.

While speaking to Fusion's Jorge Ramos about Houston voters rejecting the Equal Rights Ordinance — which would have better protected LGBT people from discrimination — Carson said trans people shouldn’t have the “extra rights” to use whichever restroom they prefer. “It is not fair for them to make everybody else uncomfortable,” Carson said, explaining he thinks transgender-only bathrooms are the better alternative. “It’s one of the things that I don’t particularly like about the [LGBT] movement. I think everybody has equal rights, but I’m not sure that anybody should have extra rights — extra rights when it comes to redefining everything for everybody else and imposing your view on everybody else.”

Shockingly — or not so shockingly, when you think about it — Carson’s comment echoes what fellow GOP candidate Mike Huckabee said about trans people and restrooms earlier this year at the National Religious Broadcasters Convention in Nashville. Huckabee stated:

We are now in city after city watching ordinances say that your seven-year-old daughter, if she goes into the restroom, cannot be offended, and you can’t be offended, if she’s greeted there by a 42-year-old man who feels more like a woman than he does a man.

Huckabee also added that he “would have found my feminine side” so he could shower with girls during high school if similar policies were around then.

In his latest interview, Carson went on to reaffirm he believes “marriage is between a man and woman" and added he objects when LGBT people “try to change the definitions for everybody.” Shortly after the interview was live-streamed on Facebook, Human Rights Campaign President Chad Griffin called Carson’s comments “despicable” in a statement.

Ben Carson’s hateful comments are out of touch and all candidates should immediately make clear that they disavow his dangerously transphobic views. Ben Carson can’t go a week without invoking reckless and irresponsible stereotypes about the LGBT community, and his suggestion that transgender people be required to use segregated bathrooms echoes an ugly past our country should never revisit.

Just as Griffin said, Carson does have a frightening history of prejudicial, ignorant comments — and not just about LGBT people.

Carson Said Women Who Get Abortions Are Like Slave Owners

Not only is he for overturning Roe v. Wade, but Carson went so far as to compare women who get abortions to slave owners, saying last month, “During slavery, a lot of the slave owners thought that they had the right to do whatever they wanted to the slave.” Yet he thinks it’s totally cool to tell women what to do with their bodies by banning abortions, even in the cases of rape and incest.

During a newly uncovered speech from last October, Carson said that “overall” Americans aren’t dumb — but “many of them are stupid.” He doubled-down this week by explaining he is referring to people who support social services. "You’d have to be kind of stupid to look at that and not realize that that’s a failure and to say we just didn’t do enough of it... That’s what I call stupid,” he said, elaborating he was talking about people “who take the disadvantaged people in our country and say, 'You poor little thing, I’m going to give you everything that you possibly need.'”

Carson Said Being Gay Is A Choice

Carson’s latest comments about trans people aren’t entirely surprising, considering the point of view he has already expressed about LGBT people: Speaking to CNN in March, Carson said people who go to prison straight and “come out” gay prove sexuality is a decision — a theory that multiple studies have discredited. Carson quickly changed his tune by saying, “I do not pretend to know how every individual came to their sexual orientation. I regret that my words to express that concept were hurtful and divisive. For that I apologize unreservedly to all that were offended.” Fast-forward to his latest interview to decide for yourself how he really feels.

Carson affirmed at least two times that he “would not advocate that we put a Muslim in charge of this nation,” saying he thinks the “tenets of Islam” contradict the Constitution. “If they are not willing to reject sharia and all the portions of it that are talked about in the Quran — if they are not willing to reject that, and subject that to American values and the Constitution, then of course, I would [not approve].” Shortly before Carson’s aide put an end to that controversial interview with CNN in September, Carson reiterated, “I'm assuming that if you accept all the tenets of Islam that you would have a very difficult time abiding under the Constitution of the United States.”

That’s funny, because a lot of people would say that if you espouse the beliefs Ben Carson does, you would have a very difficult time running the United States.