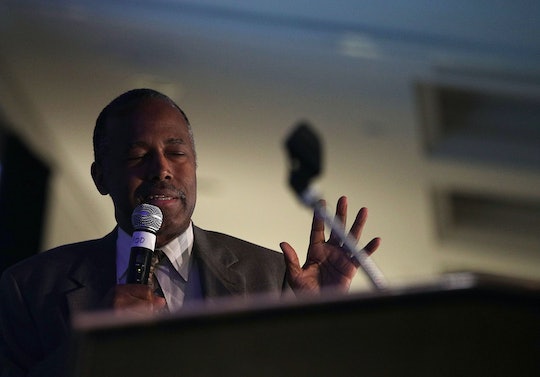 On Wednesday, the New York Times published a story following Ben Carson, the secretary of Housing and Urban Development, while he toured housing facilities in Ohio. Considering his role, it's an outing that certainly makes sense. However, as he explained in the interview while visiting these facilities, he doesn't feel that low-income or homeless individuals who rely on aid in housing shouldn't be provided with a "comfortable setting." Specifically, Ben Carson said veterans and homeless people shouldn't be "comfortable" in the housing provided to them.

Romper reached out to HUD for further comment on Carson's remarks, but at the time of publication, had not yet received a response.

At one stop, the Times noted, Carson "nodded, plainly happy, as officials explained how they had stacked dozens of bunk beds inside a homeless shelter and purposefully did not provide televisions." According to the publication, Carson explained that compassion meant not providing people with "a comfortable setting that would make somebody want to say: ‘I’ll just stay here. They will take care of me.’"

But Carson is wrong. A "comfortable setting" should be afforded to homeless and low-income individuals who need housing assistance — including veterans and families. According to The Huffington Post, around 2.2 million families depend on housing assistance from HUD, which Carson now heads, through the agency’s Section 8 Housing Choice Voucher system. Do those families not deserve a safe and comfortable place to live?

The New York Times article reminded readers that when Carson took on his role at the Department of Housing and Urban Development, he had "no government experience," and "no political experience," except for his unsuccessful bid for the Republican presidential nomination.

But President Donald Trump gave Carson the secretary of HUD position. And on his recent tour, according to the Times, "the secretary was resolute in his belief that too much government assistance has led to too much dependence."

Is it any wonder that Carson's comments are not only tone-deaf, but also ignore the sort of initiatives that actually help people to escape the cycle of homelessness? Initiatives that involve, yes, comfortable living.

As Think Progress pointed out, research has actually shown that providing housing is an effective approach to reducing homelessness. But Carson, with these latest comments and past statements critical of government assistance, seems adamant in opposing these realistic and proven methods.

One of those methods involves vouchers to help low-income residents make rent payments. According to the Times, on the tour, Carson visited the apartment of Alzene Munnerlyn, an 87-year-old who lives in senior housing and uses one such voucher to pay a portion of her rent, after she was priced out of her last residence.

After a brief chat and some photo ops, Munnerlyn said she "felt a little used" by Carson's visit. She told the publication:

It was staged. It was so fast.

There needs to be a forum where you can just sit and talk with him, and he could ask you how you feel and then you could express yourself.

And if Carson's comments about individuals being too "comfortable" in supportive facilities is being interpreted correctly, one model for an approach to homelessness that would likely be brought up during a forum like the one Munnerlyn suggested — the Housing First strategy — is likely not one that he would consider appropriate for housing low-income individuals.

The policy in question has provided proven results for reducing homelessness. The Housing First model prioritizes securing permanent housing for individuals before seeking recovery and rehabilitation — the opposite of not providing them with comfortable housing. Think Progress referred to Pathways to Housing DC, a non-profit working on homelessness issues in Washington, D.C., that follows this approach to homelessness. The organization claims an astounding 89 percent housing retention rate using this strategy.

Pathway to Housing D.C. is far from the only organization approaching homelessness this way. According to Think Progress, in Utah, a Housing First policy strategy reduced homelessness across the state by 72 percent over nine years.

Housing First is about getting individuals comfortable, safe housing first, and working on other concerns like drug rehabilitation after shelter is secured. Comfortable living conditions are the first step of this approach — not a goal to achieve after jumping through other hoops first. The U.S. Department of Veteran's Affairs reported that this approach has worked especially well with one population in particular — homeless veterans.

And in November 2014, NBC reported that about one out of 30 American children were homeless at some point in the previous year. In an infographic on its website, the Institute for Children, Poverty and Homelessness showed that homelessness is a women's issue, and a big issue for families: the graphic conveyed that a young, single mother with two children makes up the typical homeless family.

Do homeless or low-income veterans, families, children, and single mothers not deserve to be comfortable? Carson seemed to think and express that during his tour, but research has shown that providing homeless and low-income individuals with support, in the form of financial or physical housing assistance, is extremely effective in helping people escape the cycle of poverty and homelessness.